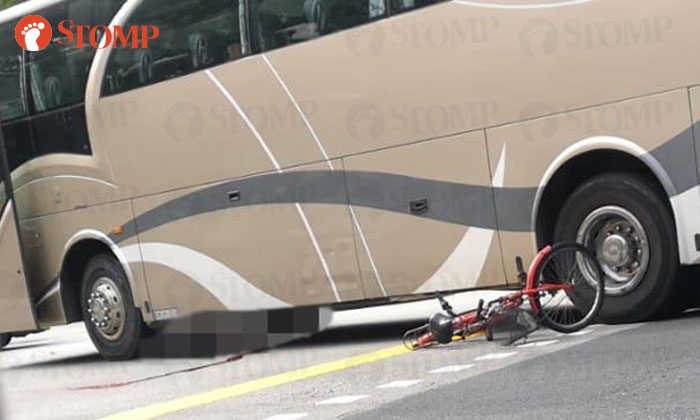 A 67-year-old cyclist died after he was hit by a bus along Jalan Bukit Merah on Wednesday morning (Dec 5).

The bus driver was subsequently arrested for causing death by negligent act, the police told Stomp.

Stomper Freddie, Dean, Hadi and Terrence alerted Stomp to the accident and shared photos from the scene that have been circulating on WhatsApp.

In one of the photos, the cyclist can be seen lying underneath the bus, behind the front left wheel.

A trail of blood is seen on the road next to him.

The man's red bicycle is also seen lying on the road next to the bus's rear left wheel.

Dean shared with Stomp a video showing Singapore Civil Defence Force (SCDF) personnel arriving at the scene and heading towards the bus.

In response to a Stomp media query, the police said they were alerted to the accident at about 9.24am.

"A 67-year-old man was pronounced dead by paramedics at the scene," a spokesman said.

According to several Stompers, the accident caused a traffic jam along Jalan Bukit Merah.

At 10.14am, the Land Transport Authority (LTA) tweeted there was congestion.

According to Terence, there was still a jam at 11.20am.

Freddie told Stomp that two of the road's lanes were blocked at that the jam was backed up until IKEA Alexandra.