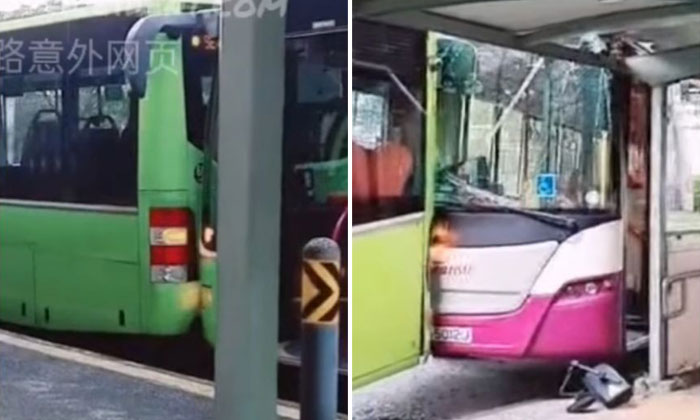 A 60-year-old bus driver and two passengers were injured in an accident involving three buses on Sunday (Oct 17).

The police and the Singapore Civil Defence Force were called to the incident at a bus stop in Upper Paya Lebar Road, near Block 160 Hougang Street 11, at about 7.25am.

The bus driver and a 72-year-old male passenger were conscious when they were taken to Sengkang General Hospital.

SBS Transit senior vice-president of corporate communications Tammy Tan told The Straits Times that one of its service 113 buses was involved in a chain collision with a service 24 bus and service 76 bus.

Ms Tan said that the driver of the 113 bus and a passenger onboard the 24 bus received outpatient treatment at the hospital.

A passenger on the 113 bus was attended to by paramedics at the scene and left soon after.

“We have been in touch with both passengers to extend our care and concern and assist as best we can,” Ms Tan added.

“We apologise to affected passengers and motorists for the distress and inconvenience caused, and are currently assisting the police in its investigations.”

In a video posted on the Singapore Bus Drivers Community Facebook page, three empty SBS Transit buses can be seen to have collided into each other at a bus stop. A side mirror is seen on the ground next to the last bus.

Bus accident along hougang the 60-year-old bus captain and the 72-year-old male passenger both injured and admitted to the hospital. The accident occurred at 7:25 am today (October 17), and the location was near the bus stop at Block 160, Hougang street 11