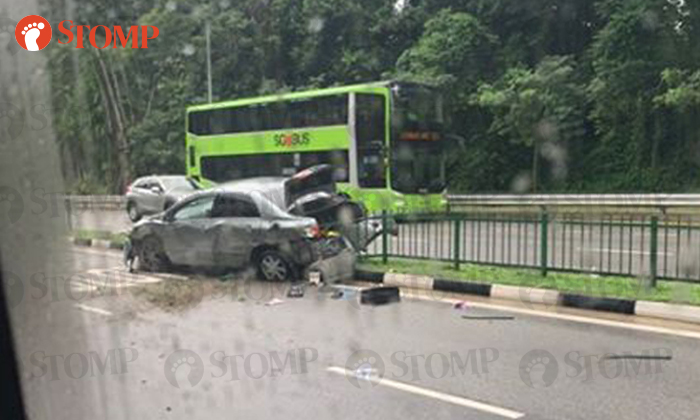 A car crashed through a central road divider along Upper Bukit Timah Road on Tuesday (Dec 10).

In response to a Stomp query, the police said they were alerted to the accident, which occurred in the direction of Clementi Road, at 4.35pm.

Stomper Kelvin had been on board SMRT bus service 171 when he noticed the collision.

Photos that he submitted to Stomp show a damaged silver car mounting the central road divider after having crashed through the railing.

Soil and debris can be seen strewn on the road.

Kelvin said that he, together with the bus driver and another passenger, went down to check on the car driver.

He told Stomp: "We went to check on the victim to see if he was all right, and called the police.

"The bus driver and I also helped to remove all the bits of broken railing that were on the road. Only when the road was clear then did we move on.

"I was too anxious to take a photo of the bus driver, but he is a kind person."