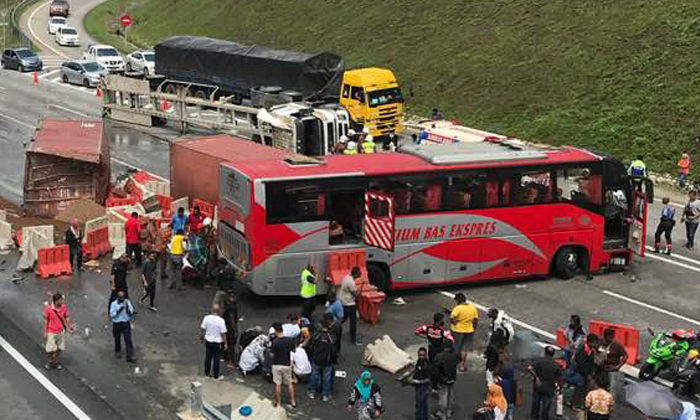 Three people were killed and 23 others injured in a traffic accident involving an express bus, a container lorry and a tanker lorry along the North-South Highway, near the Pagoh exit, on Sunday afternoon (June 3).

Shuaib K. K. Mohamed Unny, a 50-year-old bus driver from Perak, and two unidentified passengers in their 20s and 50s died on the spot, reported Bernama.

The women’s identities could not be ascertained as their travel documents were not found in the express bus.

Stomper Ang alerted Stomp to photos and a video of the accident site that have been circulating online.

According to initial investigations, the container lorry was en route to Kuala Lumpur when it was believed to have collided with the tanker lorry.

Due to the impact, the container lorry driver lost control of his vehicle, which skidded and overturned in the middle of the road.

A bus ferrying 27 passengers, which was travelling from Johor Bahru towards Kuala Lumpur, then crashed into the container load which had fallen off the lorry.

Muar police chief ACP Zaharudin Rasip said that 22 bus passengers sustained slight injuries and were taken to the Muar Hospital, along with the bodies of the three deceased victims.

The driver of the container lorry sustained a wrist injury and was sent to hospital.

There was heavy traffic in both directions at the time of the incident, added Zaharudin.