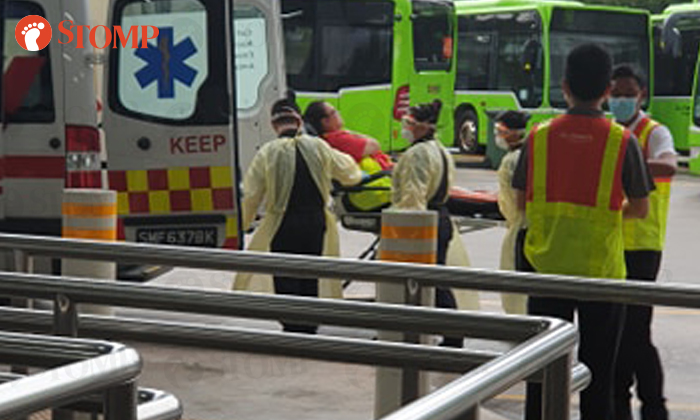 A bus captain was taken to hospital after sustaining a fall due to wet weather at Punggol Bus Interchange on April 30.

Stomper William said he saw the woman, who was in a Go-Ahead Singapore uniform, being carried into an ambulance at around 6pm.

He told Stomp: "She was sitting on the ground and could not stand up on her own. Four people had to move her onto the stretcher."

Responding to Stomp queries, a Go-Ahead Singapore spokesman said the bus captain sustained a fall at the interchange while on her way to start a shift.

"The interchange concourse was wet from the rainy weather and the bus captain unfortunately slipped and fell," added the spokesman.

"She was discharged from the hospital on the very same day and given medical leave to rest at home. She is now back at work and has been assigned with light work duties."

The Singapore Civil Defence Force confirmed that it received a call for medical assistance and conveyed one person to Sengkang General Hospital.