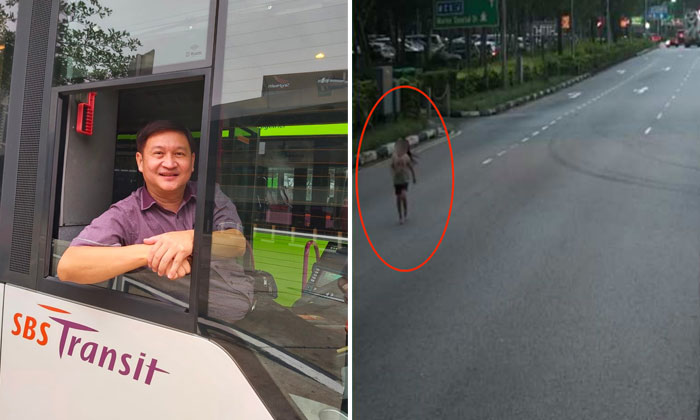 When he saw a young girl walking barefoot in the middle of a busy road, bus captain Ong Shi Chuin knew he had to act.

On Jan 16, his quick thinking saved a four-year-old girl from a life-threatening situation as he dashed out of his bus and carried her on board.

Mr Ong was driving bus service 400 when he spotted the girl walking barefooted towards oncoming traffic along Marina Boulevard.

In a Facebook post on Tuesday (April 12), Transport operator SBS Transit wrote that Mr Ong and his bus were stopped at the traffic lights when he caught sight of the girl.

"When I stopped at the red traffic light and saw the girl running across the five-lane road, my only thought was that the girl was in danger," he shared in the Facebook post.

"I immediately rushed out to carry her on board my bus before the traffic light turned green."

He was horrified by the scene before him as his bus was waiting for the red traffic lights to turn green. On that Sunday...

The girl had been playing at a nearby playground before she wandered off, 8world reported.

Her parents had been frantically looking for her.

"Shi Chuin's quick thinking and action saved the day for the girl and her family. What a hero he is! We are so proud of him," wrote SBS Transit.