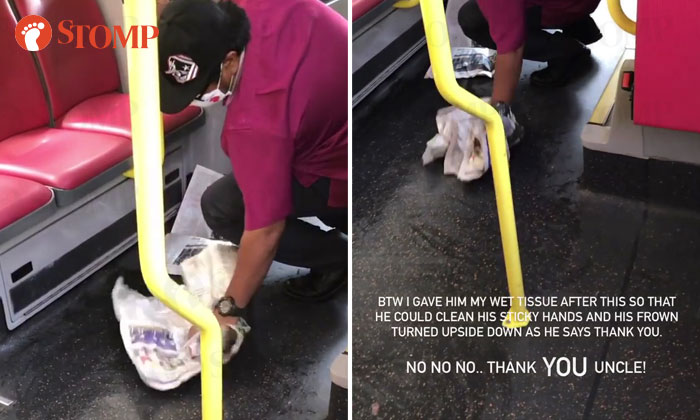 Despite commuters being discouraged from eating and drinking on public transport, some still continue to do so.

Recently, a commuter's inconsiderate act resulted in a bus captain having to stop a bus to clean up a spill.

Stomper A alerted Stomp to the incident that happened on Aug 26 at Woodlands and shared: "This poor bus captain had to pull over to pick up an empty Coca-Cola bottle and clean up a puddle of soft drink that had flowed everywhere.

"It wasn't a crowded bus and there were probably about six of us.

"I noticed another passenger had gotten some coke splattered on her leg and she was wiping it with her tissue.

"Another passenger moved away from his seat so that the bus captain could clean the area he was sitting at.

"I guess we couldn't do much as it was a whole bottle that had spilt.

"It's fortunate that the captain had some newspaper."

She shared that she also passed some wet tissue to the bus captain so he could clean his sticky hands and that this caused his "frown to turn upside down".

"I hope that this will remind others to be very careful with their sweet beverages on public transport."