Bus captain caught on video hitting motorist with helmet in JB will be disciplined: SBS Transit 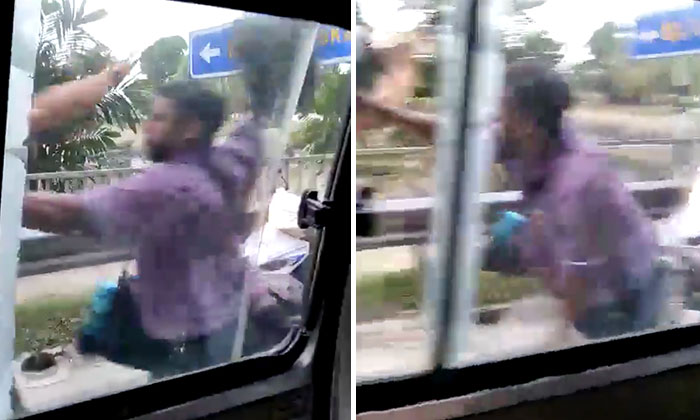 Transport company SBS Transit said in response to a Stomp query that it will take stern disciplinary action against a bus captain caught on video assaulting a motorist with a helmet.

According to a post on 新山人 新山事’s page, the incident happened at Southkey, near the entrance to Permas Jaya in Johor Bahru, Malaysia, on Tuesday (March 20) at 5.25pm.

Several videos of the incident were uploaded.

The first video shows the bus captain in uniform arguing with at least two men on a van.

During the argument, the bus captain who had been riding a motorcycle took off his helmet as he shouted at a man on the front passenger seat of the van.

Another man in a white T-shirt approached him and started to take a video.

In response, the bus captain raised his helmet and swung it at the man in white.

According to an accompanying caption to the post, the bus captain hit the man twice with his helmet.

Amidst the scuffle, other passers-by stopped to render assistance, and there were five motorists involved aside from the bus captain.

In the next two videos, the bus captain threatened to lodge a report to the authorities, saying that he had been assaulted by the five motorists instead.

He took out his phone and started taking a video of the five motorists, before riding off.

It is unclear what triggered the initial argument.

Related Stories
New video of Geylang brawl shows clearly group raining blows on man while he was down
Women beaten up and guy gets stomped on during brawl in Geylang, 22-year-old man arrested
Man swings glass bottle at another guy at Claymore Rd
More About:
assault
attack
sbs
bus captain
dispute