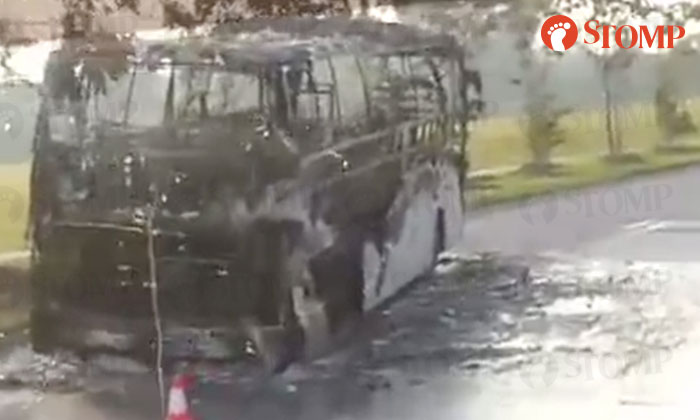 A bus burst into flames along Changi Coast Road, near the National Service Resort & Country Club (Nsrcc) at about 5.20pm on Saturday (June 9).

Stomper Kent, an employee at Nsrcc was on a bus passing by the vicinity came across the scene and sent a video of the incident to Stomp.

In the video,  the charred wreckage of a bus is seen parked by the side of the road.

"We were shocked because the bus burnt so fast.

"It's the same coach that we take every day."

In response to a Stomp query, an SCDF spokesman said:

“SCDF was alerted to a vehicle fire along Changi Coast Road at about 5.20pm on June 9, 2018, and extinguished the fire with two water jets and one hose reel.

“No injuries were reported and SCDF is investigating the cause of the fire.”