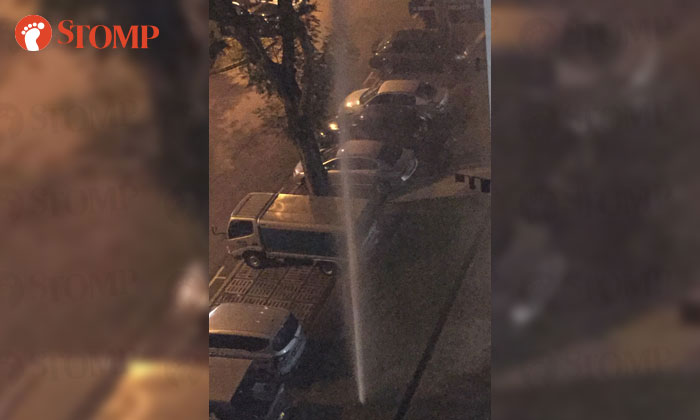 Stomper Kok Sheng woke up to the sound of gushing water outside his home at Block 249 Hougang Avenue 3 at about 3.40am yesterday (Feb 12).

When he looked out a window he saw that the source of the noise was a burst pipe with water gushing upwards.

"I was woken up by a white noise, thinking it was rain or someone washing something in the car park," said the Stomper. "That is when I saw the burst pipe and realised it wasn't raining."

The burst pipe caused the water to shoot up a few storeys high.

"The situation was handled within an hour," he said.

In response to Stomp's media queries, a spokesman from national water agency PUB said that they received a report of a pipe leak on the turf area near Block 249 Hougang Avenue 3 at about 3.40am.

"The leak was also detected by our sensors," she said.

"PUB immediately deployed our service crew and contractors to site.

"Repair works were completed at 11.15am. Water supply to customers was not affected during the course of repair work as PUB had tapped on alternative supply feed for customers served by the affected pipe.