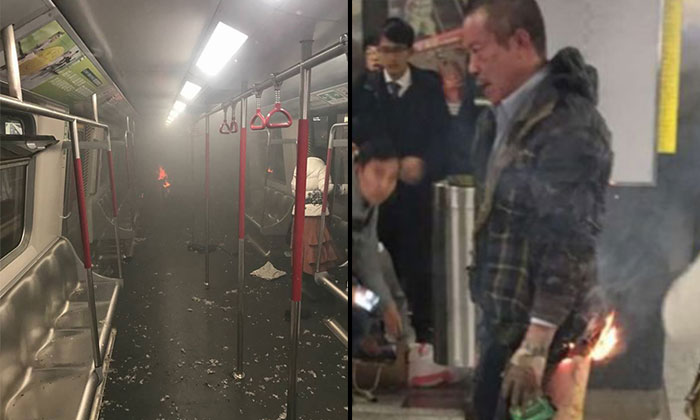 A 60-year-old Hong Kong man, Cheung Kam Fai threw a firebomb into a crowded Mass Transit Railway (MTR) train during the peak hour last Friday (Feb 10) night, injuring 17 people and sending scores into panic as passengers scrambled to get out of harm’s way.

The authorities had to shut down one of the busiest interchange due to the incident reports The Coverage.

According to the police, Cheung was heard shouting ‘burn you to death” before tossing a lit Molotov cocktail at an MTR train as it arrived in the station.

Cheung himself was set on fire in the process and passengers helped to put the fire on him out.

Police said that the act was based on personal reasons but are not ruling out terrorism as a possibility.

It was also disclosed that the suspect was a married man who had a son and daughter, and had committed minor offences in the past such as gambling.

Investigations also uncovered that he had a turbulent relationship with his wife.

The suspect is currently being held in the Prince of Wales Hospital in Sha Tin, and is said to be in critical condition.

Watch a video of the horrifying event below.