Bukit Batok bus collision: Driver who was in bus that flipped discharged from hospital 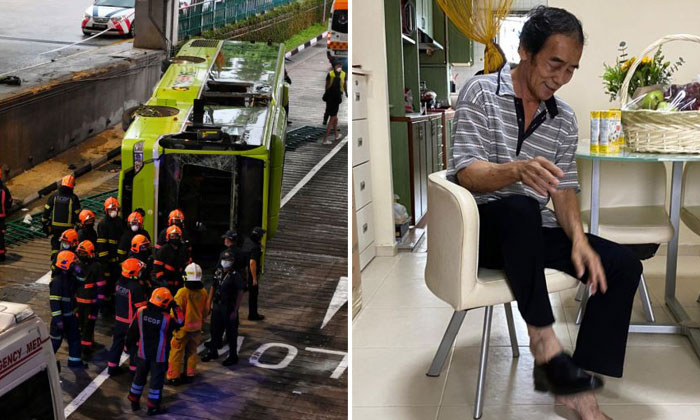 The driver who was operating the Tower Transit bus that fell on its side in an accident at Bukit Batok Bus Interchange on Sunday (July 11) has been discharged from hospital with minor injuries.

Mr Mohammad Salleh Mian is now resting at home with his family, said Tower Transit in a post on Facebook on Wednesday.

Tower Transit said its managing director Winston Toh and staff from the Land Transport Authority (LTA) had visited Mr Mohammad Salleh at home on Tuesday, bringing him gifts such as fruits and a new pair of shoes to replace the ones he lost in the accident.

"We're glad he's in good spirits and recovering in the company of his loved ones. You'll still see some bruising to his face in the photos, but he's assured us that he's feeling better," it said in the post.

The bus service provider added that Mr Mohammad Salleh was seen immediately attending to his passengers after the accident, and noticed that he was injured himself only a while later.

Photos in the Facebook post showed Mr Mohammad Salleh with a large bruise under his right eye.

Three drivers and 15 passengers were involved in the accident.

All the passengers were on the bus that flipped. The other bus was not carrying any passengers.

Tower Transit said in an update the same day that most of the passengers who had been hospitalised with injuries had been discharged.

Update on the accident at Bt Batok Bus Interchange on 11 Jul: Our Bus Captain who was driving the bus that fell on its...

Assistant secretary-general of NTUC Melvin Yong also visited Mr Mohammad Salleh, and said the union has already spoken to his employer about his medical leave, expenses and work arrangements.

Mr Yong, also MP for Radin Mas, added in a Facebook post on Wednesday: "I'm glad to see that he is recovering well and in good spirits."

Replying to a comment on its Facebook post, Tower Transit said it was also in touch with most of the injured passengers and trying to reach the others to offer them help.

"We've sent gift baskets and are hoping to visit them too. We're also assisting them with their medical and insurance claims," it said.

The LTA on Wednesday night said it takes a serious view of all incidents involving public buses, and that Tower Transit is assisting the police in the investigation.

It has issued a safety advisory to public bus operators about the importance of driving safely.

Following the accident, all four public bus operators have increased engagement with their bus drivers about safety, LTA added in its statement.

The other three public bus operators are SBS Transit, SMRT and Go-Ahead Singapore.

“We wish the injured passengers and bus captains a speedy recovery,” LTA added.