Bubble tea missing from woman's Collin's order, but she finds worm wriggling in salad instead 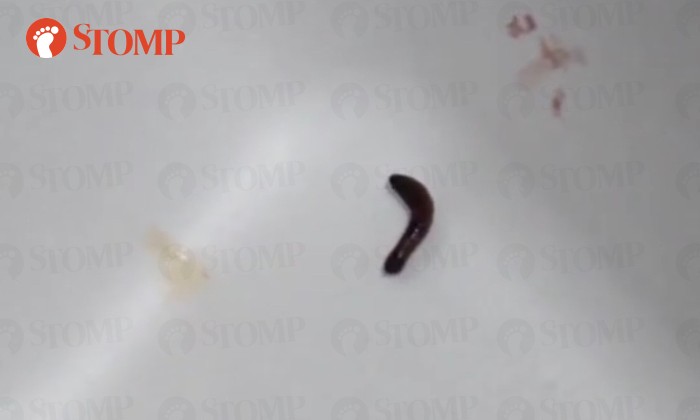 A customer whose bubble tea was missing from her dinner order had her happiness further diminished when she found a worm wriggling in her salad.

The meal was supposed to come with bubble tea, which was missing from her order when it arrived. She has since received a refund for the missing drinks.

However, Xin Yi also found a worm wriggling in the salad in her meal.

Xin Yi, who told Stomp about her experience, sent a video of the worm and screenshots of her conversation with Collin's.

"I ordered from Collin's because they were having a collaboration with Gong Cha at the time," Xin Yi said. "But when the order arrived, there were no Gong Cha drinks at all.

"The portion of the chicken chop that I ordered was also halved.

"What's worse is that there was a worm in the salad.

"I am not sure about everyone else but my family and I definitely cannot continue eating after seeing a live worm in our food.

"I told Collin's about this and they said the worm came from the bag of salad from the supplier.

The Stomper also said that she was disappointed with how the matter was handled when she informed Collin's about the incident.

Xin Yi added: "I am disappointed because we spent money on food to find happiness but in the end, we had to throw the food away and cook instant noodles instead.

"After this incident, Collin's offered me a $50 voucher but I declined."

In response to a Stomp query, a spokesman for Collin's said they have been in touch with the customer since she contacted them on July 31 with her concerns.

"Our management takes a very serious stance on such lapses in a customer’s dining experience," said the spokesman in a statement.

"We are regretful of the disappointment and inconvenience faced by the customer and have addressed her concerns through our correspondence since July 31.

"As conveyed to the customer on August 4 following our internal investigation, the worm that had been found in her salad had originated from a bag of mesclun salad procured from the supplier.

"While every effort has been made by our culinary team to consistently ensure that food safety is of the highest standard, our management has reinforced the directive for continuous compliance with our team.

"At the same time, we have also reinforced the compliance to food safety with our supplier, which is HACCP-certified (Hazard Analysis Critical Control Point) and FSSC-certified (Food Safety System Certification).

The Collin's spokesman also said that they have been following up on the customer's concerns as swiftly as they could.

"As our delivery partner GrabFood required some time to process a refund, we have informed the customer on Thursday morning (Oct 1) that they have already extended a refund to her on September 8," added the spokesman.

"To show our appreciation of this customer's support of our restaurant and her patience as we worked towards resolving this incident, we have extended a $50 dining voucher to welcome her back to Collin's.

"We hope that the above steps taken to address the customer's concerns have demonstrated our company’s uncompromising standards on food safety and dining experience and our sincerity in resolving these issues to regain our customer’s confidence.

"While it is regrettable that this incident had occurred, this customer's feedback further assisted us in our objective to continuously make improvement to our culinary and service standards."

View the entire conversation between Xin Yi and Collin's in the gallery.

Related Stories
SFA to take enforcement action against Thai food stall at Bedok after Stomper finds 'worm' in meal
Seen this 'worm' inside your prawns? It's actually a male reproductive organ
SFA investigating after woman gets extra protein in Stuff'd bowl: A cockroach
More About:
food safety
unhygienic
worm