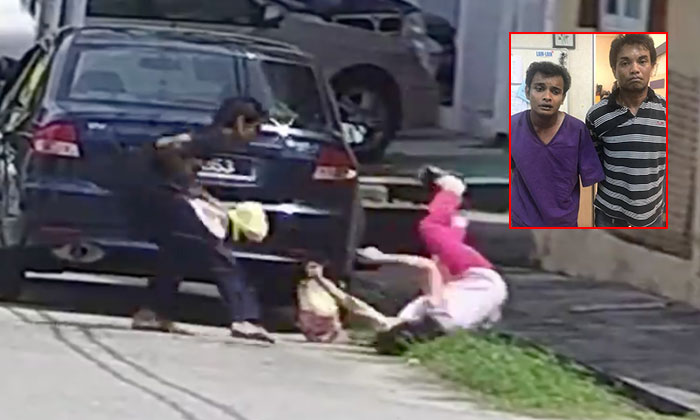 Two brothers in Malaysia have been arrested for their alleged involvement in a snatch theft case after a video of the incident went viral online.

The video, shared extensively on Facebook, shows a woman in pink walking along a street in Taman Limau Manis, Kelantan, on Sunday (Feb 25) at 12.15pm.

Meanwhile, a man alights from a black car KCE6775, parked in front of her.

The man eyes the woman, before suddenly flanking her and snatching her handbag.

The woman tries desperately to hold onto her bag and during the ensuing struggle, is thrown onto the road.

During this time, the man’s accomplice starts up the car and the man hops on, fleeing the scene.

The two suspects, aged 27 and 33 were caught by the police within an hour and a half of the incident following a tip-off, reports The Star.

A witness had given the police the licence plate number of the getaway vehicle.

They were arrested at their in-law’s house in Jalan Bayam, located 4.4km away from the scene.

The police confirmed that the two brothers had been nabbed in 2013 over another theft case and tested positive for methamphetamine.

The younger brother was the one who robbed the 72-year-old victim.

The woman was warded at Hospital Raja Perempuan Zainab II for minor head injuries and has yet to lodge a police report.

Her bag, containing cash amounting to RM200 and a MyKad device, was recovered by the police.

Related Stories
Watch brazen Malaysian thief infiltrate porch and snatch purse from woman in spilt second
Beware of what can happen when you turn your back at a petrol station
Netizens spot "Malaysia's Most Handsome Thief": He stole RM 15,000 worth of iPhone 7s
More About:
snatch theft
crime
arrest