Bro, Jurong carpark is not your motorbike workshop 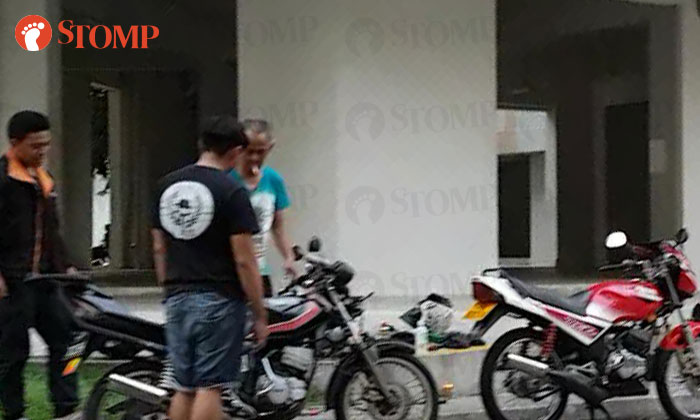 For more than a year, residents at Jurong West Avenue 1 have been subjected to noisy nights and dirty roads brought about by a man’s illegal motorcycle modifying business.

According to Stomper Jason, the elderly man would conduct his business at the void deck of Block 426, Jurong West Ave 1, from the evenings until wee hours the next morning.

Customers would line their beloved machines up at the carpark, while waiting for the man to service their vehicles.

“Most of the time, there would be at least seven motorbikes parked illegally on the double yellow lines at the carpark.

“If major repairs were needed, he (the owner) would dismantle the parts and bring it under the void deck to work.”

Jason would wake up to the noise of motorcycle enthusiasts revving their engines and test driving in the carpark after claiming their motorbikes back from the business owner.

In the morning, the oil-stained pavement and grass patches would be littered by cigarette butts from the customers the night before.

Although Jason said that he had informed the authorities many times, the situation has not changed for the better.

“Every time they send officers down, they would talk to the owner, and he would stop for a while, and continue after they leave.

“He (the owner) is quite crafty, and shifts around his operational hours to avoid the officers.

“Last time, he used to start his business at 7pm, but now he starts at around 9 to 10pm to throw the authorities off.