Briton caught on video not wearing mask claims to be 'sovereign', says charges do not apply to him 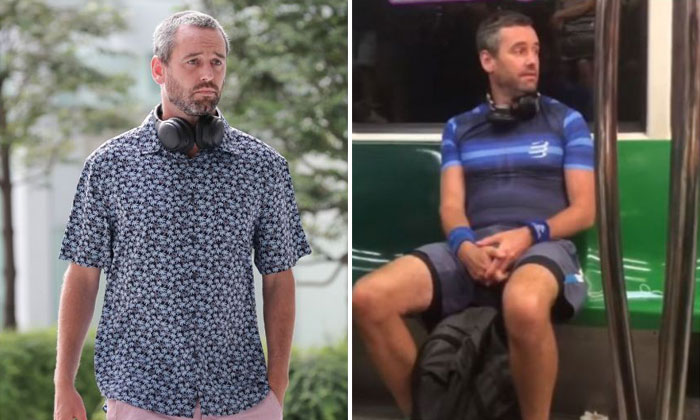 A man captured on video not wearing a mask on an MRT train in May told a district court on Thursday (Aug 5) that he is "sovereign", adding, "The charges don't apply to me".

The unrepresented Briton also said that he has a "legal counsel", pointing to a man who turned up in court wearing a dark-coloured suit.

It turned out that the man, identified as Mr Abdul Rashid Abdul Rahman, had been his bailor.

Deputy Public Prosecutor Timotheus Koh told the court that Mr Abdul Rashid was not an advocate and solicitor at the Supreme Court of Singapore.

District Judge Eddy Tham said that Mr Abdul Rashid could not represent anybody in Singapore as he had not been called to the bar here.

Addressing the court, Mr Abdul Rashid said that he is an "ambassador-at-large and advocate of Kingdom Filipina Hacienda", and that he was there to defend his "sovereign compatriot".

He also said: "I don't need a licence to practice."

Judge Tham replied that this was "not the position" of the law here and Mr Abdul Rashid took his seat in the gallery with other members of the public.

DPP Koh also urged the court to have Glynn assessed so as to ensure he is of sound mind and capable to defend himself in court.

The prosecutor said that the Briton's family and friends had written in, stating that there had been a marked change in his behaviour after Covid-19 restrictions were rolled out in Singapore.

Objecting the application, Glynn raised his voice and exclaimed: "My mind is crystal clear.. I'm wide aware. I'm enlightened... Just because I refuse to be a slave, you accuse me of being a lunatic."

He added that he had spent "hundreds of hours" studying the law and said that he knew legal matters better than DPP Koh.

He also urged the court to drop the case and return him his passport so that he could return to his family in Britain.

After hearing both sides, Judge Tham said that there is reason to suspect Glynn could be of unsound mind.

He ordered the Briton to be remanded at the Institute of Mental Health for psychiatric observation. The trial will resume on Aug 19.

Unhappy with the decision, Glynn lashed out at the court and exclaimed: "I'm disgusted with how the Singapore judicial system has treated me."

A woman who was seated in the gallery clapped when she heard this, prompting the judge to remind her to practise decorum in court.

Before he was led away, Glynn exclaimed: "Good luck getting into the book of life, Mr Koh... How can you say Singapore is a safe country. Police who hunt me down like a pack of wild animals. This is not justice. This is disgusting."

The Briton faces two charges under the Covid-19 (Temporary Measures) Act, as well as one count each of harassment and being a public nuisance.

He allegedly failed to wear a mask while travelling on an MRT train from Raffles Place station to Holland Village station between 11.06pm and 11.31pm on May 7.

He is then said to have caused annoyance to the public during the trip by declaring: "I will never wear a mask."

In a video that was widely circulated on social media, the Briton is seen telling the other commuters: "I'm very religious... I hate seeing uncles, granddads with a mask on."

On May 9, Glynn was at the ground level lift lobby of Allsworth Park condominium in Holland Road at around 12.30am when he allegedly used threatening words while addressing two police officers - Assistant Superintendent Alvin Quek Chin Han and Inspector Chee Xiu Quan.

Glynn is said to have hurled an obscene word at them when he said: "I'm going to... drop you."

He first appeared in the State Courts on July 2 and was not wearing a mask when he arrived at the main entrance of the building.

He put one on after a security officer asked him to do so.

He was then handed three charges - one count each of harassment, being a public nuisance and an offence under the Covid-19 (Temporary Measures) Act.

Glynn was walking outside the State Courts building after his court proceedings later that day when he was caught on video with his mask off.

On July 19, Glynn was handed his fourth charge, which is linked to this incident "within and outside" the State Courts building.

He had his bail revoked and has been in remand since then.

For each charge under the Covid-19 (Temporary Measures) Act, an offender can be jailed for up to six months and fined up to $10,000.

If convicted of harassment, an offender can be jailed for up to a year and fined up to $5,000.