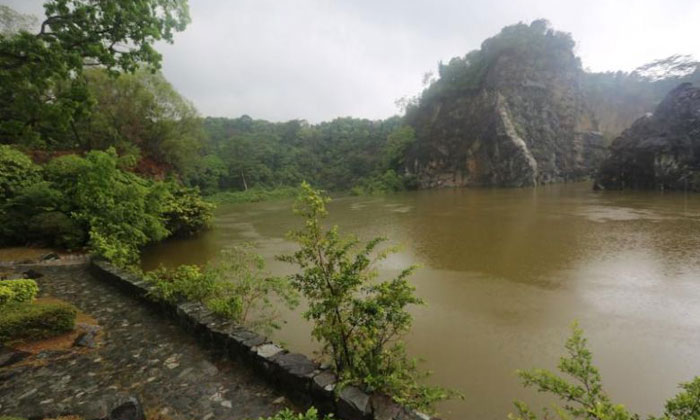 The 72-year-old woman was taken conscious to Ng Teng Fong General Hospital after being rescued from the lake using a life buoy and ladder, the Singapore Civil Defence Force (SCDF) said.

Photographer Lesley Brewin, 65, and her husband were by the lake - also known as Little Guilin - when they saw a small stool beside a low wall there.

Sensing something amiss, the couple, who are from Britain, went to investigate and saw beyond the wall that a woman appeared to be barely afloat in the lake, Mrs Brewin told Chinese-language newspaper Shin Min Daily News.

She tried to look for passers-by for help, while her husband sought to find ways to bring the woman back to shore.

As she was also a diving instructor, Mrs Brewin eventually decided to jump into the lake to rescue the woman. She kept the woman afloat and provided mouth-to-mouth resuscitation before SCDF officers arrived.

"I was focused on saving her at the time. The water was not too deep and since I'm a diving instructor, and have learnt how to rescue people at sea, I knew what to do in such emergencies," Mrs Brewin said. "I hope the woman recovers soon."

SCDF said that it responded to a call for assistance at Bukit Batok Town Park at 11.50am on Tuesday and that a member of the public helped the woman before its officers arrived.

SCDF also told The Straits Times that it was looking into recognising the British tourists for helping the woman.

The police said that they were alerted to a case of attempted suicide along Bukit Batok East Avenue 5. After she was taken to the hospital, the woman was arrested in relation to the case.