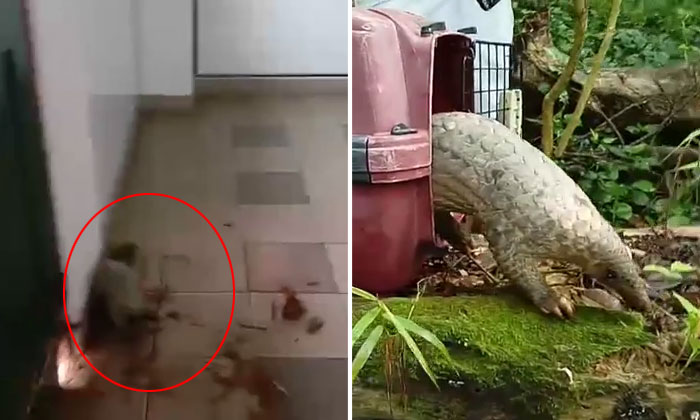 If you're listed as a critically-endangered animal, you'd best try not to get yourself in a tight spot you can't get out of, or at least be able to make a run for it if you get in trouble.

Then again if you're a pangolin, chances are you'll just curl yourself up in a ball and hope for the best. Why? It's because that's what pangolins do when a threat looms.

But one pangolin got lucky this morning when it found itself stuck in a communal room at the Nanyang Technological University's Hall of Residence 6.

According to students who found the alarmed animal around 8am, it had probably slipped through a crack in the closed wooden door of the room.

Evidence of this could be seen in the mess of wood chips and strips left in the animal's wake.

The students then called in staff from the Animal Concerns Research and Education Society (Acres) who gently picked up the scaly creature, which shares characteristics with the anteater, and placed it a carrier.

Mr Kalai Balakrishnan, Acres wildlife group director, told AsiaOne: "The animal curled up like a ball but it stayed calm through out when it was picked up and placed in a carrier bag."

The insect-eating pangolin was later released safe and sound in a forested area nearby.

Mr Balakrishnan said it is quite common to see wild animals like boars, snakes, pangolins and birds of prey wandering into the premises of the university, which is surrounded by forested areas in the Jurong West area.

Of the eight species of pangolin found worldwide, the Sunda pangolin is the only one that can be found here, mainly in the Bukit Timah and Central Catchment Nature Reserves, said Wildlife Reserves Singapore earlier this year.

Worldwide, the pangolin faces the threat of extinction due to poaching for the lucrative Chinese medicine industry and wildlife delicacy restaurants in China.

The National Parks Board estimates that there are more than 100 pangolins in the wild here. Although poaching is not an issue in Singapore, habitat loss as a result of urbanisation remains a threat for pangolins.

The slow-moving animals have been found injured or killed by vehicles when they stray onto roads here.

To report a sighting of a wild animal in places that are not their natural habitats, call the Acres' 24-hour wildlife crime and rescue hotline at 9783 7782.