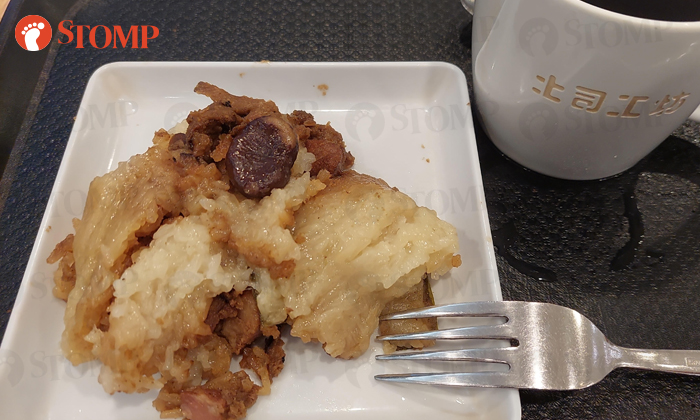 Local food and beverage chain BreakTalk has apologised to a customer who expressed his disappointment in a glutinous rice dumpling that he described as looking 'like the victim from a boxing match'.

Stomper Steven Wong earlier shared how he purchased a Teochew Double Delight Bak Chang from a Toast Box outlet at Shaw House in Orchard Road on Thursday (May 5).

The 67-year-old retiree felt that his dumpling did not look like what was advertised and said it made him lose his appetite.

In response to a Stomp query, a spokesman for BreadTalk, which owns Toast Box, said: "We are aware of the incident as we have also received Mr. Steven’s feedback through our Facebook page and we immediately initiated an investigation.

"It was indeed our staff’s oversight as the rice dumpling was overcooked and should not have been served.

"We have since conveyed our sincere apologies to Mr. Steven and are following up with him for service recovery.

"We would like to assure the public that this was an isolated incident and providing quality products is of utmost importance to Toast Box. We will take the necessary actions to ensure that quality standards are delivered at all times."