Brave girl, 18, stays behind to warn neighbours after fire breaks out in Hougang flat 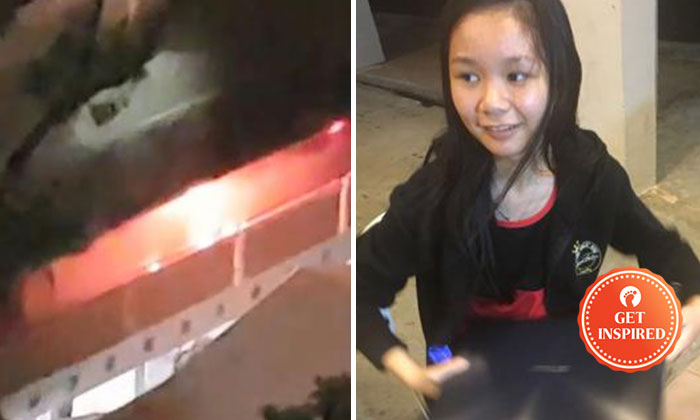 A brave girl decided not to escape with her mother and stayed back to warn over six households after a fire broke out in a unit within her block.

Over 100 residents living on the 2nd, 3rd, 4th, and 5th floor were evacuated during the fire.

Ms Hong Meiqi, 18, who lives in an apartment above the affected unit said she heard explosions and rushed down to take a look.

She was shocked to see billows of thick black smoke coming from the stairs and immediately rushed home to inform her mother.

The two attempted to flee, but Ms Hong thought that some of her neighbours may not know about the impending disaster, and decided to stay behind to warn them.

Said Ms Hong who has stayed at the block her whole life:

“We are very close to our neighbours, and we always help out one another.”

The Institute of Technical Education (ITE) student said that she was aware that there was a 90-year-old granny in a wheelchair who would have trouble evacuating the block as her children were still at work.

Not knowing how she could help, Ms Hong called the police instead.

Officers arrived at the scene within five minutes, and carried the old lady to safety.

According to Lianhe Wanbao, the fire spread to the corridors from the unit and is believed to have started due to a short circuit from a power socket.

The walls of the corridors leading o the stairs were left charred and blackened by the fire.

In response to media queries, the Singapore Civil Defence Force (SCDF) said that it was investigating the cause of the fire.