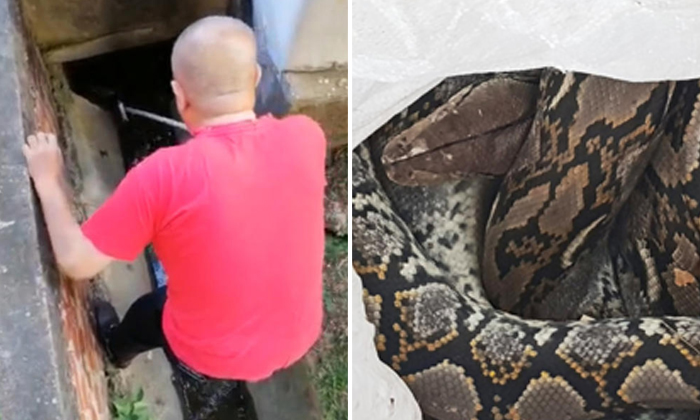 A 60-year-old man took it upon himself to rescue a large python from a drain on Tuesday (July 30).

The incident occurred near an industrial zone in Lorong 21 Geylang at around 6.50pm.

Mr Hong Shizhen said he was taking a stroll downstairs after dinner when he noticed a group of workers surrounding a canal. They were pointing at something and some were even shouting.

Out of curiosity, Mr Hong went forward to take a look and realised that there was a large python in the drain, reported Lianhe Wanbao.

He said that he had past experience in catching snakes and therefore told the workers to bring him some gloves, a nylon bag and a wooden stick.

After gathering all that he needed, Mr Hong climbed into the one-metre-deep drain.

He then put on his gloves and tried to catch the python, but the frightened reptile retreated further into the drain.

Undeterred, Mr Hong used the wooden stick to hit the ground and successfully lured the animal out.

Grabbing the reptile by its head, Mr Hong removed the python from the canal and placed it in the nylon sack.

According to him, the snake was three to four metres in length.

Mr Hong, who subsequently called the Animal Concerns Research and Education Society (Acres), also said that a crowd of 30 to 40 people had gathered to watch the scene.

He added: "I'm no stranger to catching snakes. At that time, I wasn't worried about being bitten and only wanted to quickly catch the python so that no one would get hurt."