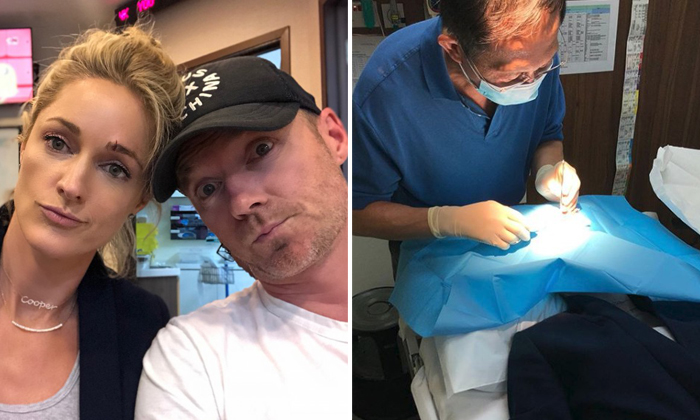 The British boyband were in town for a one-night only concert on Tuesday (Aug 21) as part of their Thank You and Goodnight world tour.

Unfortunately, the family's spot of R&R here was not without some drama, after Storm revealed she was rushed to the A&E department in the wee hours of the night.

In an Instagram post on Wednesday (Aug 22), she wrote: "Where you find yourself at 2am after your toddler sneaks a fork off the table during dinner and you couldn't get it back quick enough."

From the photo posted, she appeared to have suffered a cut to her eyebrow which required stitches.

Other than the little blip to their trip, the family seemed to have fun on our sunny island.

In another Instagram post on Tuesday, little Cooper was seen playing in the Children's Garden water park at Gardens By The Bay, and gulping down mouthfuls of water from the fountains in the process.

Probably not great for the tummy, but it is for the soul," wrote Storm. A netizen helpfully shared that "Water in Singapore are(sic) good (and safe) for consumption".

At the Singapore concert held at the Indoor Stadium on Tuesday, the fearless toddler even managed to hold court for several minutes onstage with his dad, much to the audience's delight.

Boyzone members Keating, Shane Lynch, Keith Duffy and Mikey Graham are on their farewell world tour, believed to be the last before they officially disband. The group, which is also celebrating their 25th anniversary, will play at KL on Friday and Manila on Sunday, before continuing with the rest of their tour in UK next year.