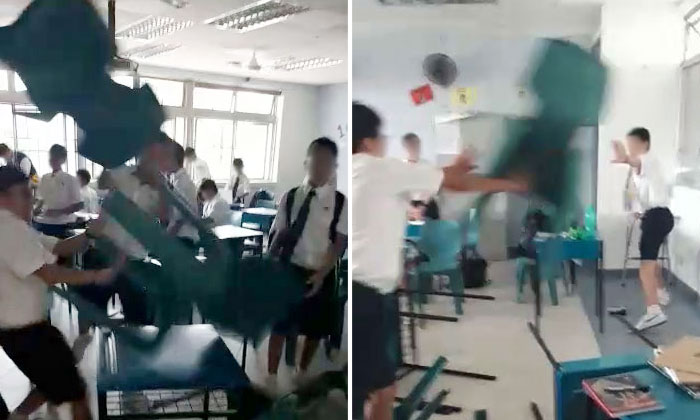 A shocking video showing students from a Singapore boys' school wrecking their classroom has been circulating online.

The chaos begins at the start of the video where two boys are seen throwing plastic chairs while another flips over a desk.

Stomp has blurred the video to protect the identities of the students.

Laughter can be heard amongst the students as one of them struts across the frame with both his middle fingers raised. 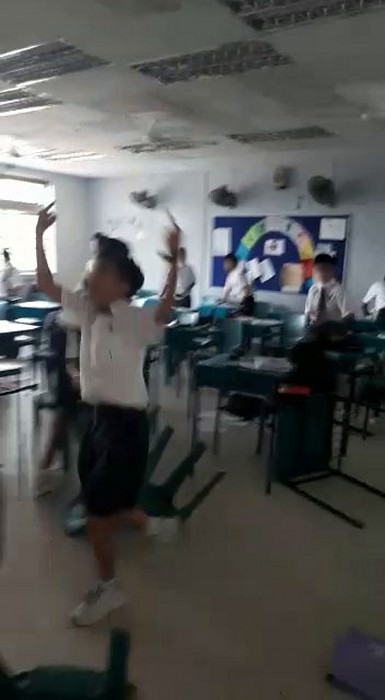 More students soon join in the brawl as more classroom furniture is flung across the room.

One chair almost hits the person recording the video, causing the camera to shake from the impact.

Not all the students appeared to be involved in the chaotic scene as some hurry to leave the classroom.

At one point in the video, one boy shouts at the others: "Oi! Do not break the tables and chairs!"

The rest stay and continue to throw chairs and tables while laughing and yelling.

However, his warning falls on deaf ears.

It is unclear when the incident happened but Stomp has reached out to the principal of the school who issued the following response:

"The school does not condone the students' actions in the video, and has counselled them and meted out appropriate disciplinary measures," he said.

He added that the students have "expressed regret for their actions".

Related Stories
Girls slap teen repeatedly, one says: "I hope the public can respect our privacy"
ITE responds to FB post by student whose wallet was stolen by classmate
"Bumblebee" from Temasek Poly fight publicly apologises for humiliating his mother for being a cleaner
More About:
classroom
brawl
students
Youths behaving badly