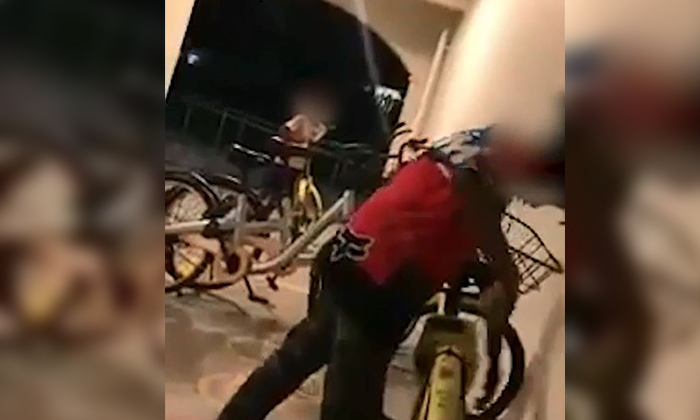 Two boys were seen damaging locks on ofo bicycles at the void deck of an HDB block before cycling away on their free ride.

A video of the incident was captured and first posted to Facebook on Dec 9, where it had been circulating widely.

In the video, a boy in a red shirt had dragged an ofo bike that had fallen on its side away and is later seen hitting the lock of one of the bicycles repeatedly using a hammer-like object.

After the lock was damaged, his friend proceeded to hop on the bike and they both cycled away.

On Sunday (Dec 10), an ofo spokesperson told The Straits Times that it is aware of the incident.

"In cases such as these, we will not hesitate to work with the authorities to ensure that our users enjoy and benefit from using our bike-sharing service," she said.

Ofo urges the public to report incidents of bike abuse on its Facebook page and app.

It also added that such incidents account for less than one percent of its bicycle fleet in Singapore.

Just last month, a couple was filmed tossing at least two bicycles from OBike into a drain at Lower Delta Road. They later turned themselves in to the police.

Related Stories
Couple caught tossing oBikes into drain turn themselves in to police
If you see oBikes in drain along Lower Delta Rd -- these are the culprits
These shared bicycles are going to fall on passers-by at Lower Delta Road anytime
More About:
Ofo
bicycle
vandalism