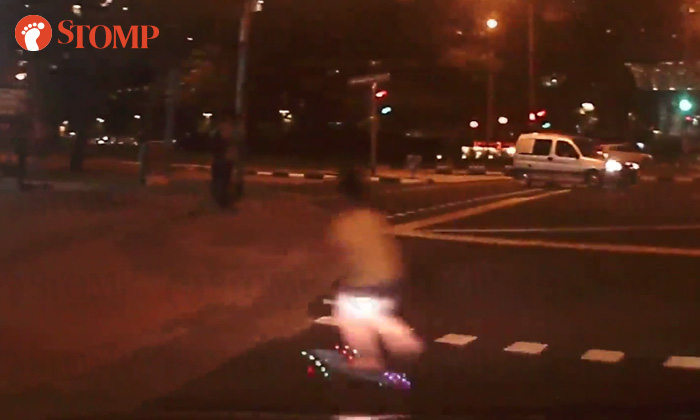 Stomper Louis was at a traffic junction in Jurong East at 8.45pm yesterday (Jun 11) when he saw a father-and-son duo recklessly zooming past him.

In a video shared by Louis, a boy is seen dashing across the road on his scooter with someone who is believed to be his father, trailing behind on a bicycle.

This was despite the oncoming car that was heading in their direction as the left-turn arrow lit up.

Louis said: "I was moving off as the left-turn arrow lighted up but the child suddenly appeared."

"Then his father followed behind without even looking at my moving vehicle.

"They nearly caused a road accident involving my car and a 'jay-cyclist' kid and his father.

"Parents, please teach your kids the correct way of crossing the road.

"Do not join your kid and anyhow cross without opening your eyes!"

Related Stories
Woman cycles against traffic along Upper Bukit Timah Road -- and past a bus
Parents, this is how your kids might be behaving on the roads
E-scooter riders behaving recklessly on roads still a common sight
More About:
scooter
bicycle
reckless
dangerous