Youth slicing canopy of Lorong Halus bridge: 'Should his parents pay for damages?' 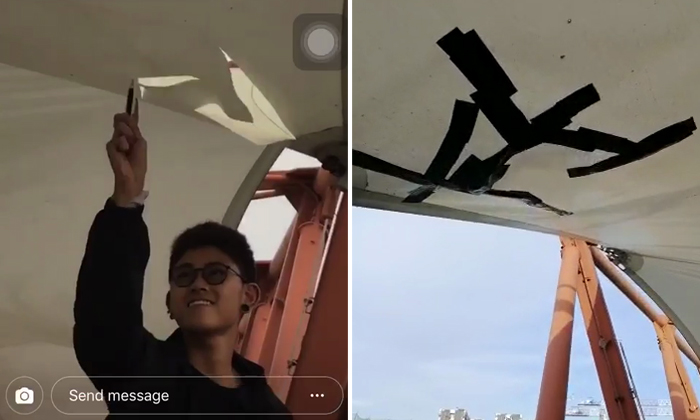 Cuts made on the canopy of the Lorong Halus bridge in Punggol by a youth last Thursday (Dec 27) appear to have been temporarily patched up.

Stomper Yong Hong visited the iconic red bridge on Tuesday morning (Jan 1) and noticed that black tape had been used to cover up the cuts on the canopy.

Yong Hong, who was there at around 8.14am and filmed a video of the canopy, said: "There were four parts that had been patched up.

"Could this be the aftermath of the damage inflicted by the youth?"

"Should the youth's family pay for the repair or will it be from taxpayers?"

This comes after an Instagram video that showed the youth using a penknife to slice the canopy of the bridge multiple times went viral.

The youth subsequently apologised for his actions, adding: "I hope that you guys will not take any action against my stupidity. I hope you guys won't press charges on me (sic)."

The Public Utilities Board (PUB), which manages the Lorong Halus Wetland where the bridge is, made a police report over the incident and police are investigating.

Stomp has reached out to the PUB for comment regarding repairs.