Boy injured by concrete that fell from ceiling of 45-year-old flat, HDB to carry out repairs 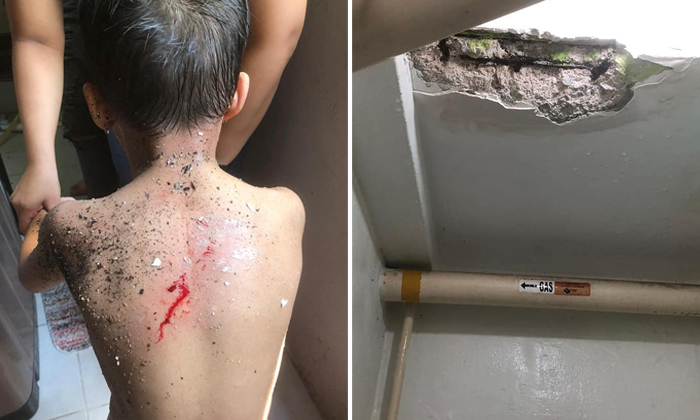 A six-year-old boy was injured after getting hit by concrete that fell from his house ceiling due to wear and tear on Tuesday (May 19).

Facebook user Syasha DanialAlissa described the incident as "the worst nightmare" for her and her son, who had been shooting water at the ceiling when the concrete fell on his back.

One of the photos that Syasha shared in her Facebook post show the child with dirt, debris and blood on his back.

She also posted subsequent updates about her son receiving treatment in the hospital and videos showing workers carrying out repair works in her flat.

According to Syasha, the matter was all taken care of "right after the incident".

Syasha later said in another update that the authorities, including the police, Housing Development Board (HDB) and town council, had arrived at her flat to check on the situation.

She shared that her son, who did an X-ray and had his wound dressed at the hospital, was "fine" and did not require stitches.

Syasha also wrote: "Yes. My son shot the water up to the ceiling right before it dropped on him. And the ceiling was already cracked even before he did it."

Responding to queries by Stomp, HDB said it was alerted to an incident of spalling concrete on Tuesday afternoon and visited the flat on the same day. Spalling concrete was found in the ceiling of the toilet.

HDB said: "Spalling concrete occurs when steel bars embedded in the ceiling start to corrode, due to the ingress of moisture and acidic elements. Over time, this causes the concrete ceiling cover to crack and fall off.

"This is a natural wear and tear process which occurs in older buildings, such as this flat which is 45 years old. It tends to occur more frequently in moisture-prone areas such as the kitchen and bathrooms, where the humidity will speed up the carbonation process, which causes spalling concrete.

"However, spalling concrete is non-structural in nature and will not affect the building's structural integrity.

"We have helped the family to clear the debris arising from the spalling concrete, and will be carrying out repair works in the flat on Friday (May 22). As this is a rental flat, HDB will bear the cost of repair.

"With regular maintenance, spalling concrete in HDB flats, if it occurs, is usually minor and can easily be repaired."

Flat owners who detect signs of spalling concrete are advised to carry out repairs early to prevent the problem from deteriorating further and affecting a larger area.

HDB added: "In the event rental tenants discover any defects such as spalling concrete or ceiling leak, tenants should report to HDB so that HDB can carry out the necessary repairs."

More details on the repair works are available on the HDB InfoWEB.