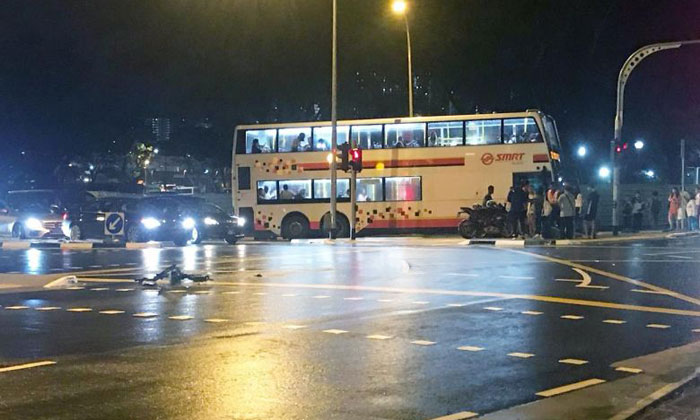 A 15-year-old boy was taken to hospital after he was involved in an accident with a bus at the junction of Choa Chu Kang North 6 and Choa Chu Kang Link on Tuesday night (Dec 11).

The police told Stomp they were alerted to the accident at about 8.08pm.

The boy was conscious when he was taken to National University Hospital.

According to Shin Min Daily News, the teenager suffered liver injuries from the accident and had to be admitted into the intensive care unit (ICU).

His mother told Shin Min that he is conscious and in a stable condition.

She added that she has never approved of her son riding e-scooters so the family does not own any personal mobility devices (PMDs).

However, the boy borrowed his friend's e-scooter before getting into the accident.

Stomp understands that he was crossing the road in the rain when an SMRT bus turned left at the junction and hit him.

According to The Straits Times, the traffic light was green, in favour of the bus, when the accident occurred.

None of the passengers on the bus nor the bus driver were hurt.

An SMRT spokesman told ST that an SMRT service 307 bus was involved in the accident on Tuesday night.

"Our immediate concern is for the well-being of the injured e-scooter rider," the spokesman said, adding that SMRT has contacted the victim's family to provide the necessary support.