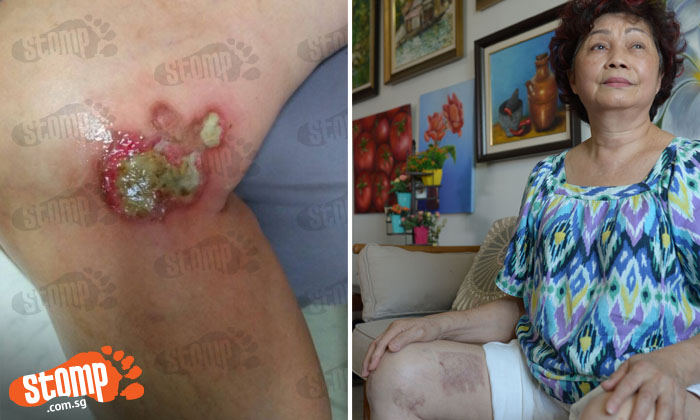 A 70-year-old woman who suffered third-degree burns on both legs following treatment at a traditional Chinese medicine (TCM) clinic will receive $50,000 in damages.

According to The Straits Times,  housewife Chow See Mui first visited the Annie Tiang TCM Clinic in East Coast Road in August 2014 with her daughter. They bought two packages and health supplements costing more than $3,000. The packages were for acupuncture and tuina, a Chinese therapeutic massage.

Madam Chow's daughter, who declined to be named, sent more photos to Stomp, which showed just how awful her mother's injuries were.

"Please help us share this on Stomp," she said.  "We just want to raise awareness to other people."

The Straits Times reported that during a session on Sept 4, 2014, persuaded by TCM practitioner Xia Rongrong, Madam Chow underwent moxibustion. This involves placing the base of a mugwort - a small, spongy herb-cone - on the skin and burning the tip that is not in direct contact with the skin.

According to court papers, Ms Xia claimed the treatment would promote general health, and was painless, harmless and risk-free.

However, it landed Madam Chow, who had only minor aches before the treatment, in hospital for a month with a $95,000 bill, which she managed to claim from her insurance company.

A clinic staff member administered the treatment. In her lawsuit, Madam Chow said she felt extreme pain but was told to bear with it as the treatment was harmless and the pain would subside shortly.

She developed blisters the same day. Madam Chow's children called Ms Xia and her husband Joseph Yap, also a TCM practitioner, to tell them her condition was worsening.

The couple maintained that the pain would subside without medical attention. On Sept 10, six days after the treatment, Mr Yap went to Madam Chow's home to check on her, and said again that she did not need medical attention, giving her acupuncture instead.

But the pain persisted. A few days later, Madam Chow went to Gleneagles Hospital, where she was diagnosed with third-degree burns and warded for a month.

After her discharge, she found out a pain in her neck was caused by a plastic piece inserted into her neck during acupuncture. It failed to dissolve as she had been told it would. She had it surgically removed in December 2014.

When she brought her claim against the clinic, Ms Xia and Mr Yap, the owners and directors of the clinic, its insurer NTUC Income Insurance Co-operativeinitially offered her over $36,000 for both her damages and legal costs.

But she decided to take the claim to court through lawyer Raj Singh Shergill in October last year.

In her court papers, she claimed damages on the grounds of negligence and breach of contractual duty of reasonable care and skill. She also sought aggravated damages from the practitioners, for not just causing her burns but also deterring her from seeking medical attention, thus prolonging her pain.

The case was resolved last month after the court mediated between both parties. Madam Chow turned down an offer of extra money by the practitioners, offered in return for confidentiality.

Madam Chow, who said she still has residual effects from the burns, said: "There is a sense of vindication, but my concern remains that no one else in their elderly years, or any person for that matter, should suffer my fate."

Mr Yap said the clinic staff member who carried out the treatment had been working there for about four months and had "accidentally" burned Madam Chow's leg during moxibustion.

"As a manager, I will claim responsibility. I am very sorry about this," he said.