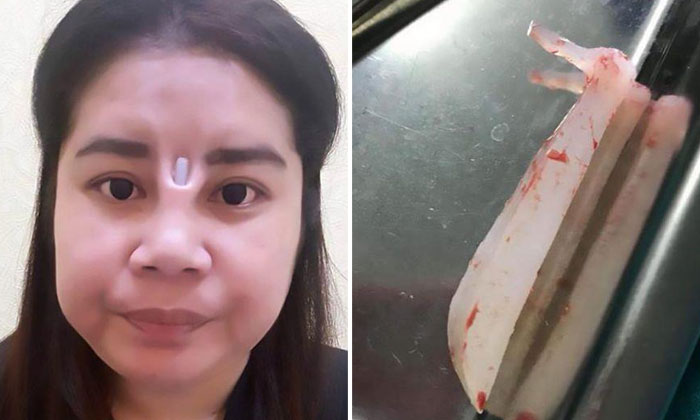 A botched rhinoplasty surgery on a Thai woman has become a hot topic on social media.

The woman's silicon implant that was inserted into her nasal ridge had protruded on the bridge of her nose between her eyes, creating a hole, reports The Star's Malay-language portal mStar.

She reportedly had the nose job done at a clinic in Hat Yai, southern Thailand.

It offered inexpensive surgery to aesthetically enhance and restructure the nose.

The silicon implant technique was supposed to make the woman's nose sharper, however, she suffered an infection to her nasal ridge.

She returned to the clinic for help but they declined to treat her.

The plastic surgery clinic told local media that they were "not responsible" for the failed procedure, hence, they "refused to help her".

Many sympathised with the woman's predicament and a plastic surgery clinic in Bangkok offered to treat the woman by removing the silicon implant in her nose for free.

Photos revealed a large hole where the implant was inserted.

It is unclear how surgeons will repair the damage on the woman's nose or if she will be taking legal action against the clinic in Hat Yai.

Related Stories
She was already pretty, but YouTube star had plastic surgery over 30 times for BF -- and now regrets it
Thai man looks like K-pop star after plastic surgery, even his mum can't recognise him
Some of these celebs actually looked better before plastic surgery
More About:
Thailand
plastic surgery
botched surgery