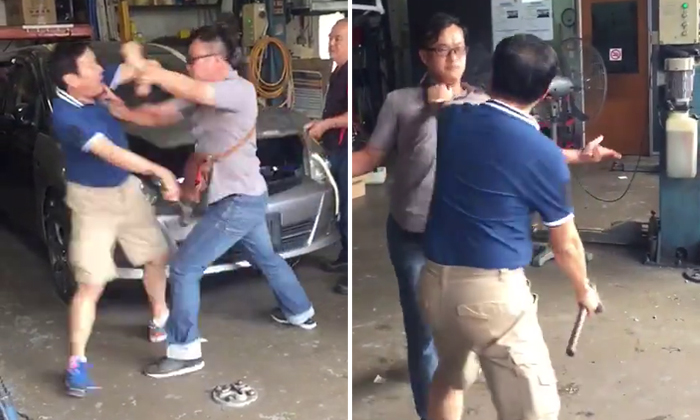 A 60-year-old man was arrested after a dispute involving him and a customer broke out in a car garage at 1 Kaki Bukit Avenue 6 on Sep 27.

Responding to a Stomp query, the police said that they received a call for assistance at 3.49pm that day.

"A 60-year-old man was subsequently arrested for voluntarily causing hurt by dangerous weapons or means and criminal intimidation," added a police spokesman.

A video of the incident that was posted on Facebook last Thursday (Oct 4) shows the two men in an altercation.

The video shows both guys standing in front of a Toyota, whose front bonnet was held open by the older guy in a blue shirt. He is believed to be the boss of the car garage.

He is seen suddenly letting go of the bonnet, causing it to slam on the younger's guy hands. 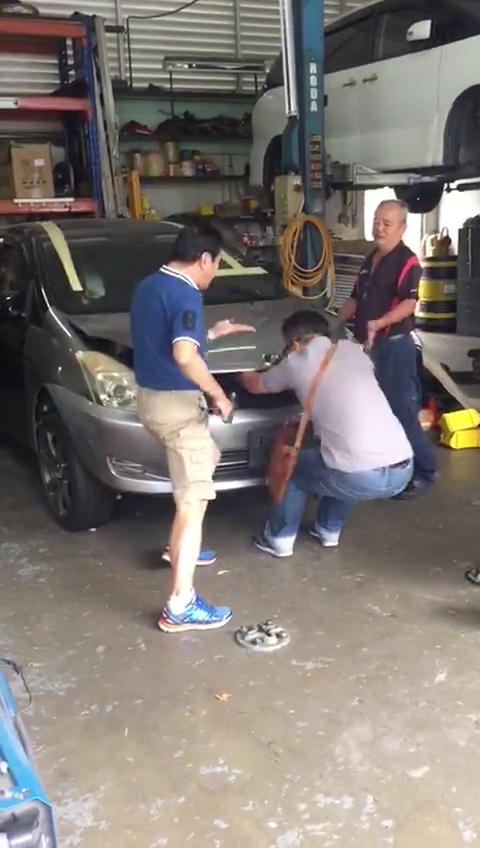 The pair then started getting into a fight, with the older man waving a hammer in his hand.

They also started pushing each other around. 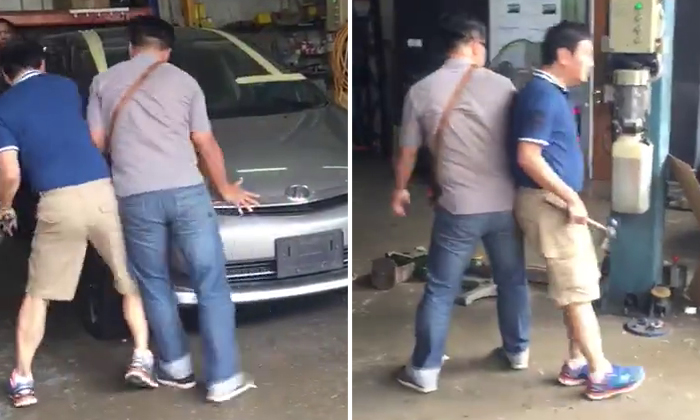 The older man can be seen wielding his hammer about, while the younger guy started shouting, "Come on!" multiple times with his arms outstretched.

The latter also used his chest to repeatedly shove his opponent despite attempts to evade and push him away. 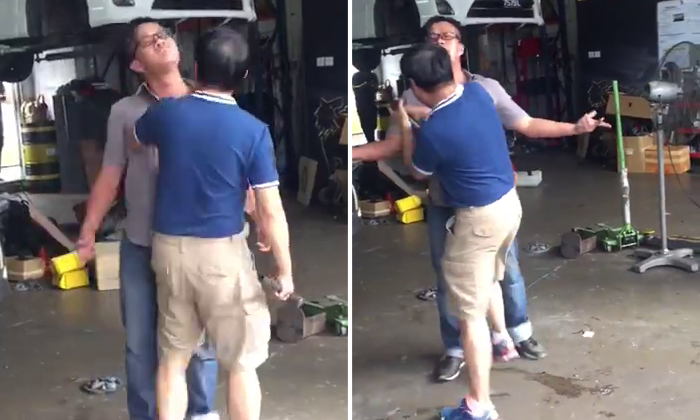 Even though other people at the scene tried to intervene, the two of them continued tussling.

Lianhe Wanbao contacted the bespectacled man in the video, whom they identified as 43-year-old Mr Liu.

He said that he had previously recommended the garage to a car driver who had been involved in an accident.

However, the two parties cancelled their collaboration as they could not come to an agreement about the commission.

Prior to the fight, Mr Liu had gotten into an accident and sent his car to the garage.

He said that the car garage's boss, however, detained his car and asked him to return his commission of $8,000 instead.

Mr Liu believes that the boss was still upset with him for not bringing in business for the garage following the cancelled collaboration.

He added: "That day, I went to the garage with a friend to collect my car. The boss insisted that I return the money, even threatening to hit my car with a hammer if I did not do so.

"During our argument, he used the wooden end of the hammer to hit me on the back of my head. I called the police afterwards.

"Because my head was in pain from being hit, I went to Sengkang Community Hospital, where I was hospitalised and placed under observation for one day."

When contacted by Wanbao, the car garage's boss emphasised that he had no intention of injuring the other party.

According to him, he went to see a doctor after being shoved over 10 times by Mr Liu and had to rest for three days.

He also said that he had to rush to Hong Kong on Saturday (Oct 6) and would go to the police station to assist in investigations upon returning on Thursday (Oct 11).

Related Stories
2 men aged 61 and 64 arrested after 'beer bottle fight' at Toa Payoh Hawker Centre
Guy shouts at and shoves uncle who tries to break up his argument with another man
Men whack one another with chairs after couple fight at Geylang coffee shop
More About:
fight
dispute
argument
arrest