Boon Tat Street death: Man stabbed son-in-law thrice after telling him 'you are too much' 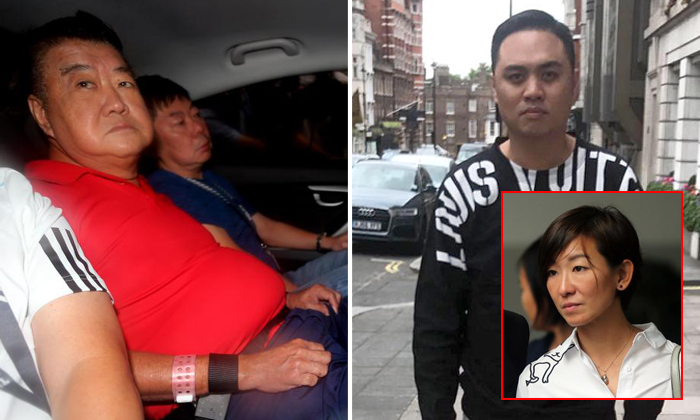 Unhappy with how his son-in-law had treated his daughter and believing that it was part of a plan to cheat him of his business, a semi-retired businessman repeatedly stabbed the younger man in front of a lunchtime crowd.

While waiting for the police to arrive, Tan Nam Seng phoned his daughter to tell her what he had done.

Yesterday, Tan, 72, pleaded guilty to a reduced charge of culpable homicide for stabbing 39-year-old Mr Spencer Tuppani in the chest three times outside a Telok Ayer Street coffee shop at about 1.20pm on July 10, 2017.

Closed-circuit television footage was played in court showing Tan attacking Mr Tuppani, who was with three friends at the coffee shop.

Footage was also shown of Mr Tuppani running away and collapsing in front of a restaurant in Boon Tat Street.

Tan was seen in the footage kicking Mr Tuppani twice in the face and chasing passers-by away.

Tan was originally charged with murder but the charge was reduced after he was found to be suffering from a major depressive disorder.

His condition, which included "overwhelming ruminations and worries about the well-being of his daughters", impaired his mental responsibility for his actions, said an Institute of Mental Health report.

The court heard that Tan founded TNS Shipping in 1974, and the business grew into various companies over the years.

His three daughters worked for the business, and so did Mr Tuppani after he married Tan's eldest daughter Shyller in 2005.

The companies were later consolidated into TNS Ocean Lines.

In 2016, the company was sold to a bigger corporation and Mr Tuppani became the chief executive officer of the new company. Mr Tuppani, who proposed the deal, persuaded his father-in-law and wife to assign their shares to him so as to boost his stake in the company.

Tan received $450,000 from the sale of his shares. "He was unhappy with the amount as he expected to receive more," Deputy Public Prosecutor Lim Jian Yi told the court.

In early 2017, Ms Tan found out that Mr Tuppani was having an affair with another woman, with whom he had two children.

The couple agreed to a divorce but frequently quarrelled over issues such as the custody of their three children.

Tan found out Mr Tuppani was recording the arguments and suspected that he planned to use the recordings in divorce proceedings.

On July 4, 2017, Tan's younger daughter Sherry was suspended from the company following a dispute with Mr Tuppani's personal assistant. This troubled Tan, who believed his eldest daughter could be removed as well. He believed that Mr Tuppani planned to cheat him of his business by divorcing his daughter after taking control of all their shares.

Tan arranged to meet Mr Tuppani to discuss the suspension and felt disrespected when the younger man cancelled the meeting.

On July 10, 2017, Tan was on the way to the office at Cecil Court when he saw Mr Tuppani at Telok Ayer Street. When he reached his office, Tan went to the pantry to look for a knife, and then headed to the coffee shop.

At about 1.20pm, he told Mr Tuppani "you are too much" in Hokkien, pulled the knife out of his sling bag and stabbed the younger man.

After Mr Tuppani collapsed at Boon Tat Street, Tan told passers-by: "This is my son-in-law, don't help him, let him die."

He then placed the bloodied knife on a table beside him and calmly sat on a nearby chair.

When Ms Shyller Tan cried over the phone after hearing what he had done, he told her: "What's done cannot be undone."

The case was adjourned for sentencing arguments.

The maximum sentence for culpable homicide is life imprisonment and caning. Tan cannot be caned as he is above the age of 50.