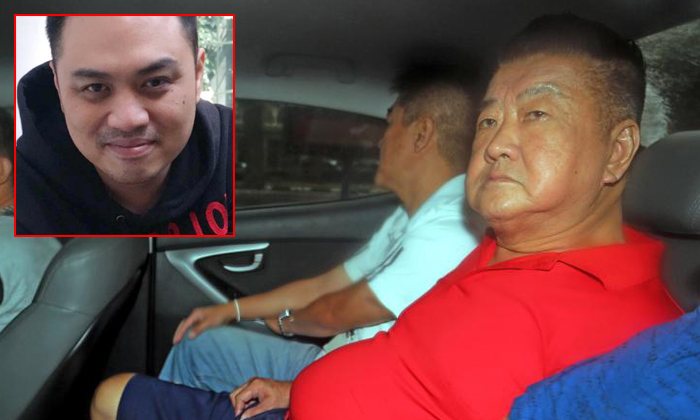 A semi-retired businessman who fatally stabbed his son-in-law in front of a lunchtime crowd three years ago was sentenced to 8½ years' jail on Monday (Sept 21), in what a High Court judge described as a “tragic” case.

Tan Nam Seng, 72, was unhappy with how the younger man had treated his daughter and believed that it was part of a ploy to cheat him of his shipping business.

He had pleaded guilty last month to a reduced charge of culpable homicide for stabbing Mr Spencer Tuppani, 39, in the chest three times outside a Telok Ayer Street coffee shop at about 1.20pm on July 10, 2017.

Closed-circuit television footage played in court showed Mr Tuppani running away and collapsing in front of a restaurant in Boon Tat Street.

The older man was seen in the footage kicking Mr Tuppani twice in the face and chasing passers-by away.

“This was a vicious and brazen killing carried out in broad daylight on an unsuspecting victim having a meal in a coffee shop in the Central Business District,” said Justice Dedar Singh Gill in sentencing.

However, the judge noted that Tan was suffering from major depressive disorder at the time.

The judge said Tan’s “fast-deteriorating health” also weighed heavily on his mind. In the three years he spent in custody, Tan has contracted tuberculosis and suffered two heart attacks, among other medical issues.

The jail term was backdated to Tan’s date of arrest. With the usual one-third remission, he is expected to be released in about 2½ years’ time.

On July 10, 2017, Tan was on the way to the office at Cecil Court when he saw Mr Tuppani in Telok Ayer Street. When he reached his office, Tan went to the pantry to look for a knife, and then headed to the coffee shop.

He told Mr Tuppani “you are too much” in Hokkien before pulling the knife out of his sling bag and stabbing the younger man.

After Mr Tuppani collapsed in Boon Tat Street, Tan told passers-by: “This is my son-in-law, don’t help him, let him die.”

He then placed the knife on a table beside him and calmly sat on a nearby chair.

While waiting for the police to arrive, Tan phoned his daughter.

Tan was originally charged with murder but the charge was reduced after a psychiatric report said that his depression impaired his mental responsibility for his actions.

On Monday, Deputy Public Prosecutor Lim Jian Yi sought 12 years’ jail, calling the attack a case of “vigilante justice”, motivated by revenge, that resulted in a brutal and public killing.

There is a need to deter others from taking matters into their own hands, he argued.

Even if Mr Tuppani was planning to take his business away from him, “killing him is not the answer”, said the DPP.

Defence counsel Wee Pan Lee sought 7½ years’ jail, arguing that Tan’s sentence should not be more than a life imprisonment.

Mr Wee said Tan felt betrayed by Mr Tuppani, whom he treated almost like his own son.

Tan started off as a coolie, worked his way up and grew his business over the years.

Mr Tuppani hired his parents as employees even though they were not involved in the business, and used company funds to pay for his lavish lifestyle and his brother’s overseas education, he said.

Shyller conceived a fourth child in 2015 but was forced to terminate the pregnancy by Mr Tuppani, said Mr Wee.

In 2016, Mr Tuppani persuaded the Tans to sell the company to GKE Corporation.

However, Tan and his daughter received only $450,000 each, instead of the $1 million and GKE shares they expected, said Mr Wee.

In 2017, Tan’s daughter Shyller discovered that Mr Tuppani had bought a property and had a second family with another woman.

Tan found out that Mr Tuppani had been recording the couple’s arguments and believed he intended to use them in divorce proceedings.

However, Mr Tuppani assured him that he would not claim for custody of his three children with Shyller.

But after Tan’s younger daughter Sherry was suspended from the company, Tan found out that his son-in-law had started custody claims.

“It then dawned on the accused that he had fallen victim to Spencer’s grand ploy and it was his plan all along to keep all the GKE shares and the balance of the cash for himself. The constant reassurances and promises were lies and were all part of Spencer’s ploy to destroy his family, by taking over the business and fighting for custody over the grandchildren.”