Boon Lay wedding slashing: 2 men jailed for 36 and 39 months, given 6 strokes of cane each 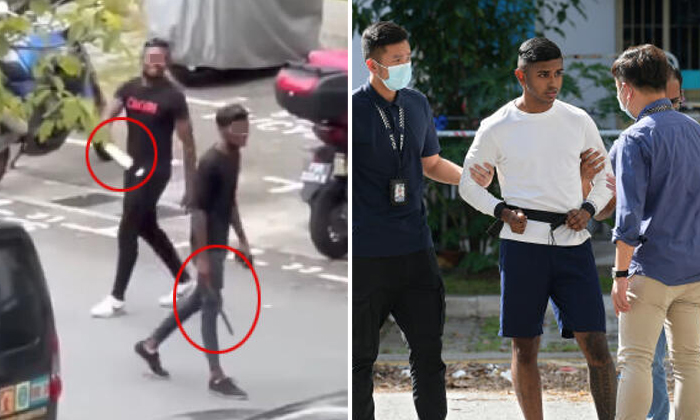 Two men who carried out a knife attack at a wedding party in Boon Lay were sentenced to jail and caning on Wednesday.

Muhammad Sajid Saleem, 21, was sentenced to three years’ jail with six strokes of the cane. He had pleaded guilty on Nov 2 to one count each of being a secret society member and voluntarily causing grievous hurt with weapons.

His accomplice, 20, was sentenced to three years and three months’ jail with six strokes of the cane. He was also fined $1,800 and disqualified from holding or obtaining all classes of driving licences for a year from his date of release.

The younger offender had pleaded guilty to six charges that included voluntarily causing grievous hurt with a dangerous weapon, being a member of an unlawful society and criminal intimidation.

He cannot be named as he was around 14 years old when he first got involved in secret society-related activities in 2016. Those who commit offences before they turn 18 are covered under the Children and Young Persons Act.

Both lawyers had earlier asked District Judge Carol Ling to sentence their clients to reformative training as they were youthful offenders.

Offenders given reformative training are detained in a centre to follow a regimen that can include counselling and foot drills.

Deputy Public Prosecutor R. Arvindren, however, had urged the court to sentence the pair to jail and caning, stressing that the current case was not their first brush with the law.

The prosecutor said Sajid had earlier committed a range of offences including rioting and was previously placed on probation.

Meanwhile, the younger man, who had earlier committed offences such as rioting and vandalism, had previously served a stint in a reformative training centre.

Before handing down the sentences on Wednesday, the judge said she agreed with the DPP and added: “Deterrence has overtaken rehabilitation in (the current) cases.”

The two offenders met in 2016 and bonded four years later when they realised they were members of the same secret society. They agreed to support each other if either of them had any disputes with third parties.

Two months before the attack in April, Sajid became infuriated in February 2022 after his then girlfriend messaged a man identified as Mr Praveen Raj Chanthiran, 23. Sajid called Mr Praveen to tell him not to contact the woman, sparking verbal disputes over the phone.

Sajid then planned an attack against Mr Praveen after an argument in late March.

On April 5, Sajid told his accomplice that he wanted to attack Mr Praveen, who would be in Boon Lay for a friend’s wedding.

The next day, the pair bought two bread knives that were about 23.5cm long before heading to Block 175 Boon Lay Drive with the weapons.

They tracked Mr Praveen’s movements through his social media posts and saw him exiting a vehicle with others at about 4.50pm. The group had returned from the wedding and intended to continue celebrating at the groom’s block.

The duo ran towards Mr Praveen, and Sajid swung the knife at his head. They also slashed the victim’s hand.

When another man from the wedding party, Mr Sarankumar Subramaniam, 22, shouted at the attackers, Sajid slashed him on the head.

The two assailants chased Mr Praveen and slashed his upper torso and hands multiple times. They also kicked him.

Sajid’s accomplice also wanted to slash the groom when the man asked them why they had to ruin his wedding. Sajid pulled his friend back as he did not have any dispute with the groom and did not want to harm him.

The offenders later disposed of the knives in a rubbish chute and took a private-hire vehicle to a mutual friend’s home in Woodlands. That person gave Sajid a change of clothes so he could avoid police detection.

Both victims were taken to the National University Hospital with multiple injuries.

Mr Praveen had wounds on his left shoulder, forehead, elbows and arms, and fractures in his left index finger, right elbow and left arm. He had to undergo three operations and was given 118 days’ hospitalisation leave.

Mr Sarankumar, who had a laceration on his scalp, was given 32 days’ hospitalisation leave.

Videos of the attack went viral on social media, and the two attackers surrendered to the police the next day.