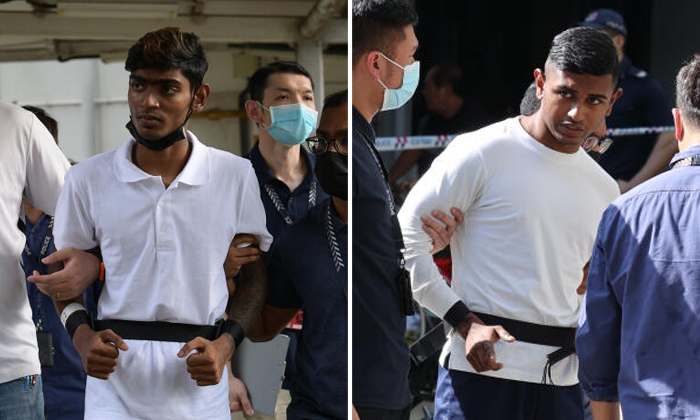 Two men were charged in court on Saturday morning (April 9) over an alleged slashing that disrupted a wedding ritual in Boon Lay Drive on Wednesday.

Singaporeans Muhammad Sajid Saleem, 20, and Niswan Thiruchelvam, 19, appeared before a district court while in remand via video link to have the charges read out to them.

They were each handed one charge of voluntarily causing grievous hurt with common intention by using bread knives to attack Mr Praveen Raj Chanthiran at an open-air carpark at 175 Boon Lay Drive on Wednesday.

Court documents did not state Mr Praveen’s age but the police said in an earlier statement that the pair had allegedly attacked two men, aged 22 and 23. They were not charged with injuring the other man.

Sajid and Niswan appeared together on a screen in the court room, dressed in white; their faces without expression.

If found guilty, they can be jailed, fined and caned. They were not represented in court.

They were remanded, with permission to be taken out for investigations, and will return to court on April 14.

On Wednesday at 5pm, the police received multiple calls for assistance with reports about the attack. The pair were believed to have thrown away their weapons before the police arrived at the scene.

An islandwide manhunt for the duo ensued and they were found on Thursday in Woodlands by the police with the help of surveillance cameras.

The accused were taken back to the incident site on Friday afternoon to walk the grounds with police investigators.

On Wednesday, the bride Yuroshini Josephine, 25, and groom Emmanuel Ravi, 26, were in the midst of a wedding ritual at home when the groom received a call that his friends, who attended the wedding, had been attacked.

Mr Emmanuel told The Straits Times on Friday that the victims were close friends of the family, and added that he knew one of the alleged attackers but not very well.

Mr Praveen, who suffered some 12 cuts on his head and limbs, remains in hospital and will undergo multiple operations. The other victim, Mr Saran Kumar, had an 8cm gash on the side of his head. He was discharged from hospital on Friday morning.