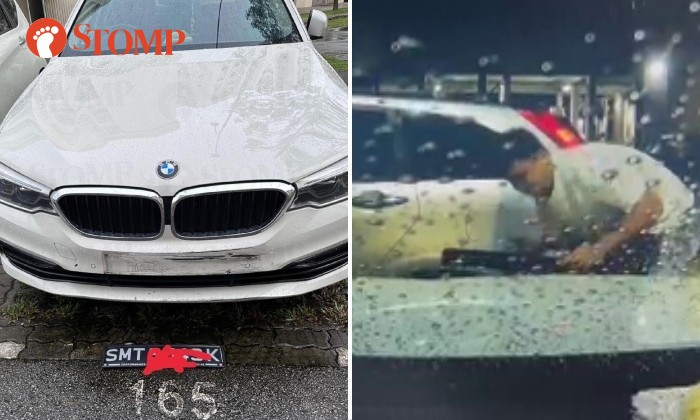 Instead of being on the car, the front number plate was placed neatly on the ground in front of the car.

A BMW owner was surprised to discover on Monday morning (Nov 14) that her car parked at Jurong East Street 13 had been damaged.

Stomper Angela said: "I was shocked when I saw my car plate on the ground, but I was rushing for time to send my daughter to school in the morning so I did not really check the car."

Suspecting a hit-and-run, she later looked at the video on her dash cam.

The video, which she shared with Stomp, shows a car coming to a stop in front of the BMW and the driver getting out to look at the BMW.

He picked up the fallen car plate and seemed to try to fix it back but gave up. He then appeared to wave to someone off-camera before the video ends.

"I feel that maybe the driver thought that he only hit the car plate," said the Stomper. "That was why he put the car plate neatly on the ground. It was still dark. He might not have realised that there were scratches on the car."

The video does not show the man's car hitting the BMW. The Stomper said the dash cam is motion-activated and that was all the footage she has of the man.

"I really don't understand how he can drive until he hit my car," Angela told Stomp. "I don't think he hit it when reversing. But he did not leave a note."

She said that she has made a police report and is appealing for witnesses.