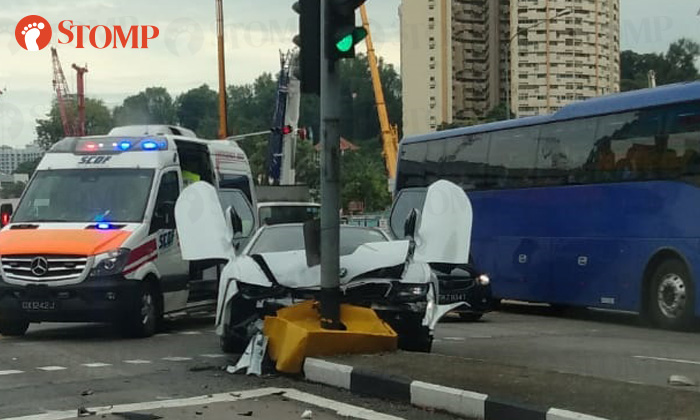 A BMW crashed into a traffic light post after it was hit by another car in an accident at the junction of New Bridge Road and Cantonment Road on Oct 13 at about 9.15am.

The driver, a 58-year-old man, was taken to Singapore General Hospital (SGH) with minor injuries.

Stomper Ah Boy shared a photo of the accident with Stomp.

In the photo, a white BMW sports car is seen to have collided into a traffic pole from the front.

Stomp understands that the accident happened after a car, which was making a left turn from Eu Tong Sen Street onto Cantonment Road, hit the back of the BMW, which was travelling from the opposite direction.

In response to a Stomp media query, the police said: "On Oct 13, at 9.17am, the police were alerted to an accident involving two cars at the junction of New Bridge Road and Cantonment Road.

"One of the drivers, a 58-year-old man, was conscious when conveyed to Singapore General Hospital (SGH).

Singapore Civil Defence Force (SCDF) also said to Stomp: "SCDF was alerted to an incident at 9.15am on Oct 13.

"One person was conveyed to SGH."

Related Stories
5 taken to hospital after 2 cars collide along CTE
Trailer overturns on slip road along BKE
Car flips over during accident with another vehicle in Woodlands, 2 taken to hospital
More About:
accident
BMW
car crash