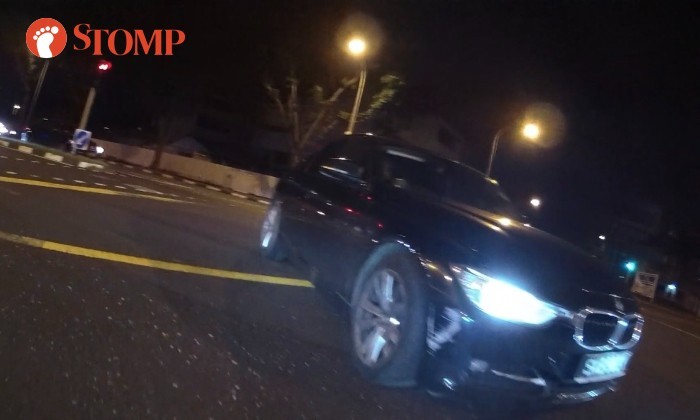 Stomper Min was on his bicycle when he almost collided with a BMW car that beat the red light at the junction of Still Road and Koon Seng Road.

Min shared video footage of the near-accident that happened on Monday (Oct 26) at 10.39pm.

In the video, the bicycle can be seen moving off after the traffic lights turned green.

A BMW car then appears from the opposite direction to make a right turn and almost collides with the bicycle.

"I was waiting for the lights to turn green and moved off a few seconds after it became green," Min shared.

"Suddenly, the BMW car beat the red light to turn right and almost knocked me over.

"He shouldn't have done that! Luckily, nothing happened as I stopped my bicycle in time but I can't imagine what would have happened if I didn't.

"I'm not sure what's the hurry to make a right turn especially since the traffic light in his direction had been red for a while.

"I was looking at him and he had that look like this is his father's road.

"Then he just drove out without a sense of guilt and without apologising to me!"

Min added that he decided to share the video footage as he wanted to create more awareness about road safety.

Related Stories
Driver's near-miss with cyclist in Choa Chu Kang: 'Any faster and I would be in police station'
Things could have gone awry for little boy who whizzed across road on kick scooter
Close shave for elderly man and car in near-accident in Tampines
More About:
near-miss
cyclist
dangerous