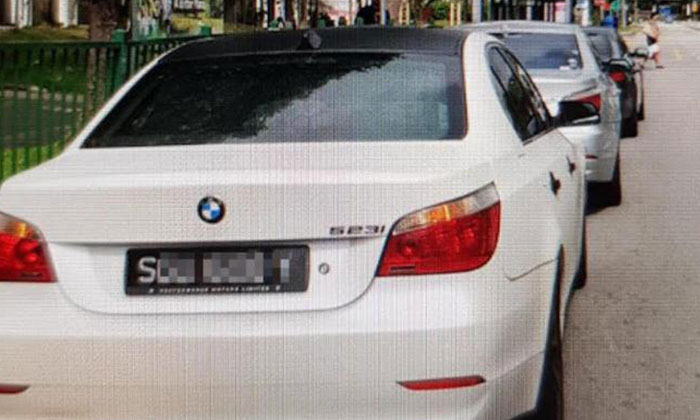 A female driver received a summons which claimed that she had been speeding at 116kmh and went to consult the Traffic Police (TP), only to find out that her licence plate had been stolen and she had been framed.

The woman, Madam Chen, received a letter in April 2017 from the TP stating that she had on the March 8, at around 1 am, sped along Upper Thomson Road at 116kmh.

The speed limit along the road is capped at 70kmh.

As she had not been out that day, she realised that her licence plate could have been stolen and misused.

Madam Chen immediately inquired about the incident with the TP and asked to review video footage of the incident.

Upon checking the footage, she immediately realised that the BMW sporting her vehicle licence plate in the video was not hers.

She had already scrapped her BMW car on Mar 6 and changed to a Mercedes.

At the same time, Madam Chen found the white BMW in the video familiar, and after checking the video again suspected that it was the same car which had rammed into the back of her old BMW in Feb 2017.

It turned out that on Feb 28, while she was travelling along Yishun Avenue 6, the white BMW had tailgated her vehicle and was unable to stop in time when the lights suddenly turned red, causing a collision.

The collision left the back of Madam Chen’s vehicle damaged.

Mr Chen rejected the driver’s offer to settle the matter privately and approached her insurance company for compensation.

She also suspected that the BMW driver could have been unhappy after he was rejected, and intended to frame her.

Based on Madam Chen’s description, the police begun a series of investigations and concluded that the driver of the white BMW had indeed stolen her licence plate and placed it over his own BMW.

The suspect, Hong Yixiang, 27, was charged yesterday morning (Jan 10) for speeding, as well as the theft and misuse of Madam Chen’s licence plate.