BMW driver who gave the finger responds: "Lorry driver cut in front and hurled vulgarities at me" 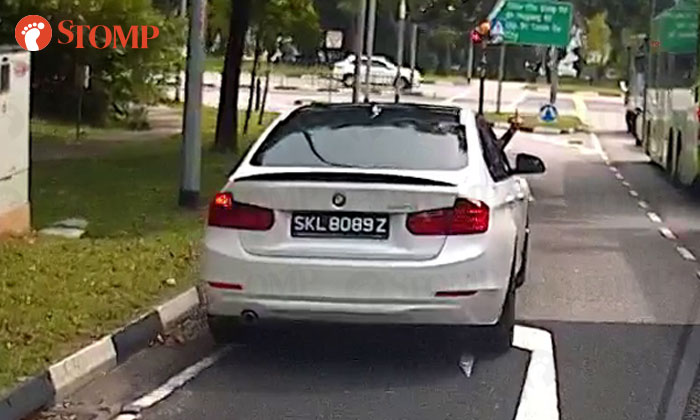 The BMW driver who flashed his middle finger in a video shared by Stomper Nanson has reached out to Stomp explaining his side of the story:

"I was exiting the KJE after returning from a trip to Johor Bahru and was caught in a heavy traffic jam for nearly three hours.

"As I was exiting, a big truck with a Malaysia licence plate number cut into my lane at a high speed without checking his blind spot.

"I had even signalled way before going to the exit so he could see me but he caused me to swerve to the side and almost get into an accident.

"After that, I saw him hurling vulgarities out of his window as if I'm the one at fault which resulted in me acting that way due to frustration and anger.

"The hand gesture was never meant for the driver behind me (Nanson)."

A BMW driver flashed his middle finger at another motorist after he was honked at for hogging a lane at a Kranji Expressway (KJE) exit on Apr 3 at about 2.50pm.

Stomper Nanson shared a video with Stomp of the incident.

In the video, the white BMW slows down to a stop in the left-turn lane filtering to Woodlands Road.

When Nanson sounded his horn at him to alert him, the man is seen sticking his right hand out of the window to show him the middle finger.