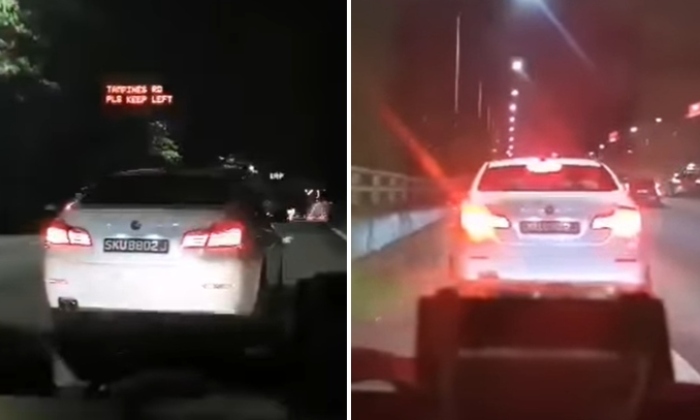 A BMW driver was seen dangerously jamming on his brakes in an attempt to cut another car off along the Kallang-Paya Lebar Expressway (KPE).

The incident, which happened on Jan 9, was caught on camera and posted on ROADS.sg's Facebook page. The video has since amassed over 126,000 views.

Footage of the incident was also posted on SG Road Vigilante's YouTube page.

In the video, a BMW and the car which the video was taken from seem to have stopped in the middle of the expressway.

The car then attempts to overtake the BMW, but fails to do so as the BMW driver quickly cuts him off.

The driver can be heard saying: "He's drinking, you see. Look at him. Drinking, drinking!"

The cat and mouse chase continues as the BMW inches forward quickly but subsequently jams on the brake, causing the car behind it to do the same.

He proceeds to overtake the BMW by switching to the right lane but the moment the cars are both out of the tunnel, the BMW driver cuts him off and jams on the brake again.

Both vehicles can then be seen stopping at the side of the road before the video abruptly ends.

According to the post, the BMW driver apparently "started his road rage" as he was not happy that the other car was "hogging the first lane".

While the video clearly shows the BMW in a bad light, many netizens choose to believe that a dispute occurred before that, stating that the video shows only one side of the story.

On the other hand, other netizens expressed their disapproval of the BMW driver's actions, adding that such antics are dangerous and could cause accidents.