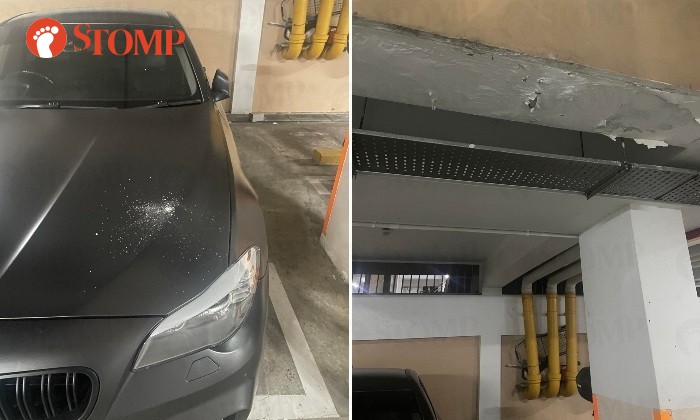 A car owner is frustrated after his BMW was damaged by flakes of paint falling from the ceiling of the basement carpark at Block 115A Yishun Ring Road.

Sharing photos and videos of the flaking ceiling paint and the paint flakes on his car, Stomper Jeremy said: "The rain causes the paint to flake and as the flakes are wet, they got stuck to the car and could not be washed away."

He told Stomp he started calling Nee Soon Town Council about the problem on Tuesday (June 14) and has been "frustrated" by the town council’s response.

Jeremy said: "Every day, I had to keep calling them until Friday (June 17) then they responded.

"They asked me to drive my car to go down and let them see the damage. Never apologised or anything. I said if they want, they can come to me. I didn’t see why I must drive to them. Then they said okay, they will come to me by 5pm.

"At 4pm, I had to call and double-check with them and he said cancel.

"After that, another lady called me. I was frustrated already so I said okay, where you are now, I will drive to wherever you are to show you."

He said the town council asked him to contact a contractor, who apparently told him this was normal and the paint flakes could be easily washed away.

"I asked him to come down and wash. He said he was not in Yishun already. I will be proceeding to rectify the issue myself. But I think people should be aware of such dangers."

The Stomper also wants the town council to create awareness for others to remember to check the ceiling when parking at the carpark.

In response to a Stomp query, Nee Soon Town Council said on Saturday (June 18): "Upon receiving feedback from the resident, we inspected the area. The ceiling paint had peeled off due to wear and tear. The town council will carry out rectification works to the affected areas.

"The town council has extended our apologies to the car owner for the inconvenience caused, and will continue to stay in touch with him to address his concerns directly."