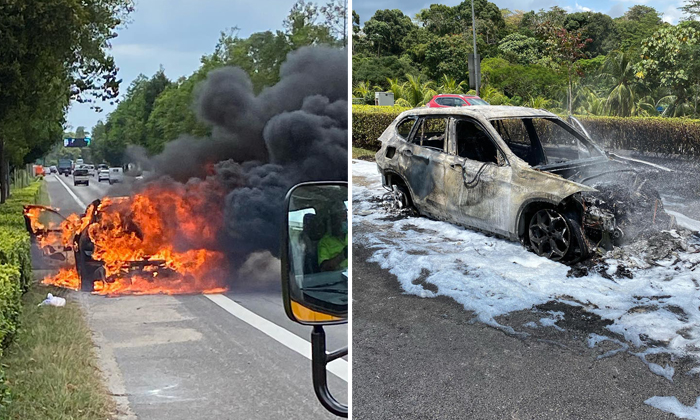 When his BMW X1 burst into flames on the Bukit Timah Expressway last Saturday, Mr Lester Cher thought of going back into the SUV to retrieve some items.

But the memory of a recent fire involving another BMW made him think better of it.

The 33-year-old told The New Paper yesterday: "I kept thinking of the people in the Tanjong Pagar car accident. Five of them were burned. How scary.

"All those items I wanted to retrieve were material goods and it was not worth risking my life for them.

"In fact, when I thought of how I was almost a victim of a car fire, I was so traumatised and shaken. But I'm safe and just thankful to be alive."

Mr Cher, who declined to reveal his occupation, said he just stood back and watched his black car burn to an empty shell.

In the Tanjong Pagar accident on Feb 13, five men died when the BMW M4 Coupe they were in crashed into a shophouse and caught fire.

A woman is recovering in hospital after suffering severe burns when she tried to save her boyfriend, who was the driver.

Mr Cher was on his way to pick up his wife at about 1.30pm when he noticed a burning smell and white smoke emitting from the air-conditioning vents.

Realising that something was amiss, he pulled over immediately at a road shoulder before the Bukit Panjang exit.

"It was weird because there were no warning lights or messages from my car to indicate anything was wrong.

"I even checked under the bonnet, but visually everything seemed fine," said Mr Cher, who bought the second-hand car in August last year.

As the smoke started to get thicker, he decided to check the fuse box and saw it was on fire.

"I immediately called 995 and tried to flag down passing motorists to see if anyone had a portable fire extinguisher. Unfortunately, no one stopped."

By the time the Emas Vehicle Recovery Service team arrived, their attempt to put out the fire was futile as the flames had grown too big.

The Singapore Civil Defence Force (SCDF) arrived minutes later and extinguished the blaze with a water jet and a compressed air foam backpack.

Its spokesman told TNP there were no reported injuries and the cause of the fire is under investigation.

"The fire was so strong, it melted the rims of my car and destroyed it," said Mr Cher.

He added that cash cards, some documents, a car seat and a stroller were also destroyed.

"I don't know if that's the reason my car caught fire. But I'm planning to talk to the people at the BMW workshop on Monday to figure out how this might have happened."

Mr Eric Cheong, 56, the director of BH Auto Services, told TNP that such vehicle fires are likely caused by a short circuit and are not uncommon.

Drivers who modify their car engines or add new components are more likely to encounter such mishaps, he said.

Mr Cher said he has not made any modifications to his car.

Mr Cheong, who has been in the motoring industry for over 15 years, recommended motorists to keep a portable fire extinguisher in their vehicle.

"You never know when you will need one," he added.

He advised drivers not to use water to put out electrical fires as it is ineffective and poses a risk of electrocution because water conducts electricity.

"If you don't know whether it's an electrical fire or not, just refrain from pouring water on it. Instead, keep a distance and call 995."

As for Mr Cher, his experience has taught him the value of having a portable fire extinguisher in his next car.

"I may not dare to fight a big fire. But at least it will be available if I do need it," he added.

An escape from a burning car on 6 Mar 21 - While driving along BKE towards PIE, I smelt a burning smell from within the...