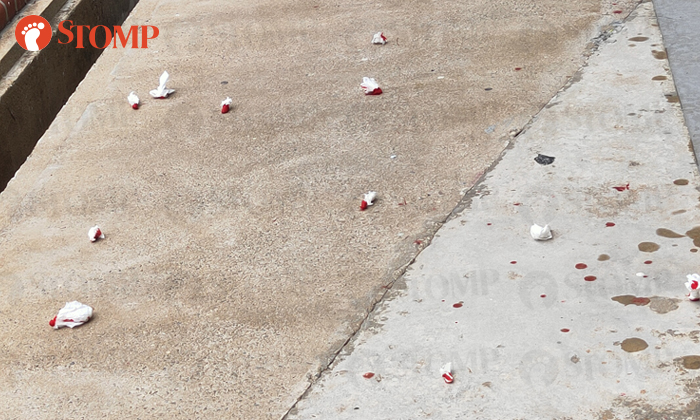 High-rise littering has been a persistent problem at Block 543 Ang Mo Kio Avenue 10, according to a resident.

However, the issue recently escalated with bloodied tissues being thrown down the block.

Stomper J said he first noticed the disgusting sight on Saturday (Feb 12), at around 5.45pm. He continued seeing the bloodstained tissues on Feb 13 and Feb 14.

Sharing photos with Stomp, J said: "The tissues are covered in blood. This is extremely hazardous, disgusting and inconsiderate on all levels.

"There are kids and elderly people walking around. Imagine the bloodstained tissues falling on their head or face, not knowing what kind of disease this inconsiderate person carries.

"As I kept observation, I saw a person on the top floor corner window digging the nose with a tissue and blatantly throwing it down.

"This is also not the first time this person had thrown things down. There is litter every day. It's mostly tissues, but sometimes there are earbuds, and once there was a small empty parcel box with his address. However, bloodstained items are a first.

"On Tuesday (Feb 15), there was even an Antigen Rapid Test (ART) kit thrown down.

"There is absolutely no regard for anyone else or the laws we have in place to keep the neighborhood clean.

"The previous occasions, I reported it to the authorities and was told that a general advisory had been issued. I reported the latest incident too but the tissues are still there.

"I believe people on the ground are working relentless to keep neighborhood clean despite such residents.

"I would like to share this and hope to find out - with such hazardous items being thrown down, what can be done by law to teach him a lesson? Do bloodstained tissues have same weightage as killer litter as an offence?"

In response to a Stomp query, a spokesman for Ang Mo Kio Town Council said it received feedback about the tissue litter on February 13.

"The affected area has been cleaned and we are currently working with the National Environment Agency (NEA) to educate residents on the dangers of high-rise littering as it poses a risk to everyone’s safety and well-being," the spokesman added.

"For public and residents' safety, we urge residents to dispose of their litters properly."