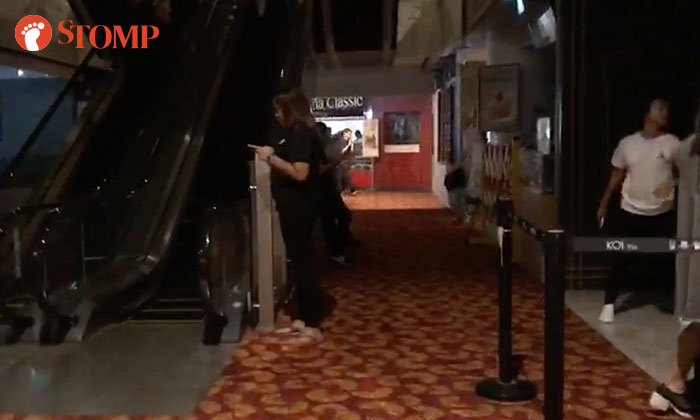 A power outage on Friday afternoon (June 1) affected several buildings in the Centre Business District, as well as its surrounding areas including Chinatown.

Several Stompers were caught in the power outage and alerted Stomp to the incident.

Stomper Foo who works at Chinatown Point in New Bridge Road said the electricity suddenly went off  at about 2.45pm.

He took a video of the situation in the mall and sent it to Stomp.

In the video, the lights in the shops were all switched off.

People are seen climbing down travelators and escalators which have stopped moving.

However some of the lights in the lobby and near the lift were still on, and Foo explained that those were the emergency lights and would still operate during a power outage.

“No problem lah, we live in Singapore, what’s there to be worried about.

“The electricity will come back soon enough.

“It’s just inconvenient because we are all so dependent on electricity now.”

In an update later, Foo said that power was restored at about 3.15pm.

Elsewhere, Ms Bernice Koh, 24, told The Straits Times that the power went just after 3pm at her office in China Square Central in Cross Street.

“All of us were shocked because it went dark all of a sudden.

”But after that, we heard that it was not just us and that other buildings, such as those on Robinson Road, were also affected.”

Ms Koh said that her colleagues stayed in the office until the light came back on at about 3.30pm.

In a post at 3.30pm, Twitter user Zubaidah Nazeer said that the blackout at her office was ongoing for more than half an hour, adding that there were some passengers who were stuck in the lifts.

Am stuck on 33rd floor, 77 Robinson in a major #powerfailure in Singapore's #robinsonroad. Half hour and counting. Reports from others who say raffles place affected, people stuck in lift. #poweroutage #blackout

She posted an update at around 3.40pm, saying that the power in Robinson Road had been restored.

Another Twitter user, musicalhouses, revealed that she had to walk down 28 floors to get to her meeting due to the blackout.

There was a blackout in my office building in CBD area, had to walk down 28 floors of stairs to get to my meeting! Also check out my sweet sweet blackout selfie lol pic.twitter.com/ot7CCg8Aux

SP Group said in a statement that electricity supply to parts of Raffles Quay, Robinson Road and Shenton Way was disrupted at about 2.41pm on Friday, affecting 3,156 customers.

"Our officers were immediately deployed to the affected areas and our priority was to restore supply as safely and quickly as possible.

It added that it is investigating the cause of the disruption.