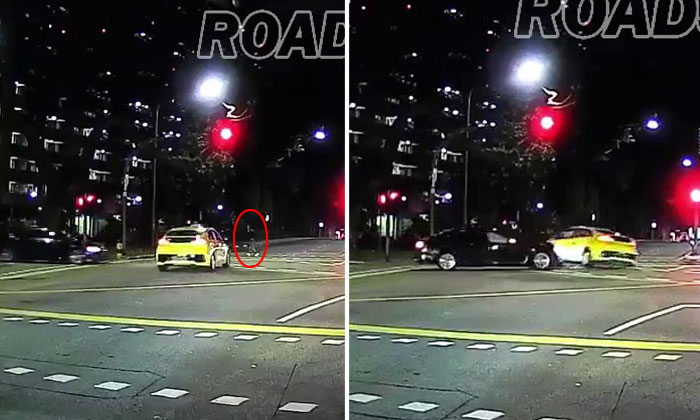 A pedestrian was inadvertently saved after a black car crashed into the side of a taxi running a red light at Jalan Bukit Merah.

Stomper Allen alerted Stomp to the incident that was posted on ROADS.sg's Facebook page.

According to the timestamp on the video, the incident happened on Jan 29 at about 8pm.

In the video, a pedestrian can be seen running across the road while the red light is showing for oncoming motorists to stop.

A taxi is then seen running the red light and heading right for the pedestrian when a black car coming from the left drives right into the cab's side before it can reach the pedestrian crossing.

A man's voice can be heard saying, "That guy is a goondu," right after the collision.

Netizens have hailed the driver of the black car as a "hero" for accidentally saving the pedestrian's life.

In response to a Stomp media query, the police said they were alerted to the accident at the junction of Jalan Bukit Merah and Henderson Road at about 8.21pm.

"The car passenger, a 61-year-old woman was conscious when conveyed to Singapore General Hospital," a spokesman said.