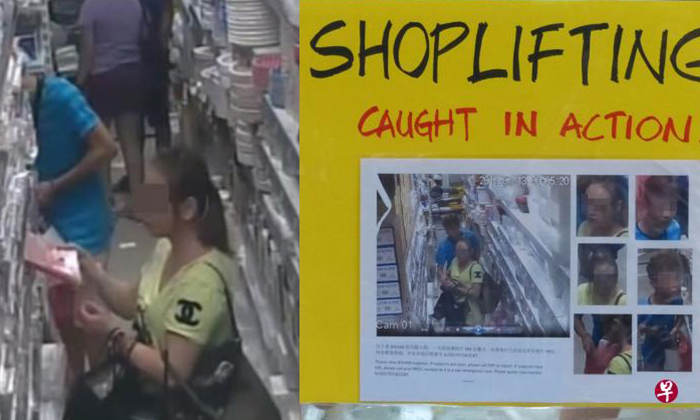 After a couple were spotted on closed-circuit television (CCTV) sweeping items off racks into their bags at a Bishan shop, the owner pasted photos of the two at the shopfront -- but was criticised by members of the public for not respecting the couple’s privacy.

The incident happened at a shop at Bishan Street 13 on July 13 at around 8pm.

It was earlier reported by Stomp after being alerted by Stomper Karen, who also sent in the CCTV footage.

According to the footage supplied, the duo placed several stacks of items into bags, only stopping when a customer appeared.

As soon as the customer left, the two started rearranging the items in the bags, before leaving the shop.

All these happened within five minutes.

When reporters visited the shop on Friday (July 28), they saw portraits of the two pasted at the front of the shop.

A store employee also told them that a man in his forties had scolded them for not respecting the privacy of the two, even threatening to call the police on them.

Shin Min Daily News interviewed a lawyer later and confirmed as long as the affected party had irrefutable evidence, he or she has the legal right to display the photos of the suspects.

He added that displaying the photos of suspects involved and getting the public to identify them is perfectly legal.

He also encouraged the action, saying that this not only shames the perpetrators, but also serve as deterrence.

Note: The captions were included in the video by the Stomper. Stomp did not edit the video in any way with the exception of the opening/closing scenes and the watermark on the top right.