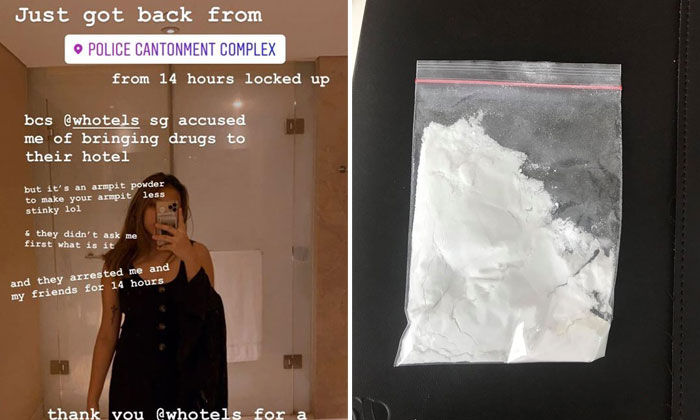 The teenager had wanted to celebrate her birthday at a hotel with friends, but a misunderstanding turned it into a nightmare, involving police arrests and over 14 hours in custody for the girl and her friends.

Taking to Instagram yesterday to share her ordeal, user Sharonia Paruntu said she had spent 14 hours under police arrest after a deodorant powder – tawas powder or alum powder – she had taken to W Singapore in Sentosa Cove in a small resealable plastic bag was mistaken for drugs by the hotel staff.

The police told The New Paper that on Nov 10, at 9.29am, they were alerted to a packet of white powdery substance, suspected to be drugs, found in a room in W Singapore.

A man and three women aged between 18 and 19, who had occupied the room, were subsequently arrested for suspected possession and consumption of controlled drugs.

The police said: "They were released unconditionally at 1.43am on Nov 11 after preliminary testing on the white powder and their urine samples turned up negative for controlled drugs."

On her Instagram, Miss Paruntu described the exchange with the police in the hotel room.

She said after they found the bag of powder, she had said: "Yeah, just put (the powder) on your armpit then you wouldn't smell for the rest of the day."

She said the police escorted her and her friends out of the hotel in handcuffs.

Miss Paruntu, an Indonesian living in Singapore, posted: "And the police escorted us out of the hotel with handcuffs, and it was really humiliating because some of the hotel guests saw us and assumed we are criminal."

Lawyers and legal experts TNP spoke to said the police had acted well within their powers.

Criminal lawyer Amolat Singh told TNP that under the law, the police can hold a suspect in custody for up to 48 hours to conduct preliminary investigations.

He added that the basis of having reasonable suspicion is enough for an arrest to be made.

According to Miss Paruntu's Instagram stories, two of her friends were stuck inside the hotel room's bathroom at around 2am because they could not open the bathroom door.

Her other friends attempted to open the door but ended up breaking the clear sliding door.

They decided to call the hotel staff for help. The staff who arrived then spotted the bag of powder, but according to Miss Paruntu, did not ask her what the powder was.

Mr Singh said the circumstances surrounding the incident, including the broken bathroom door, coupled with the bag of white powder, could have appeared incriminating, increasing reason for suspicion.

The 14-hour arrest was also not entirely out of the ordinary, lawyers said.

Mr Rajan Supramaniam, a senior criminal lawyer, told TNP that test procedures could take several hours because the specimen has to be sent to the Health Sciences Authority for testing and can take some time.

He added that it is also not out of the ordinary that the police had cuffed the teenagers.

Mr Supramaniam said that there are situations in which the police will cuff their suspects, such as if there is a large group, or the suspect is insolent, uncooperative or exhibiting rowdiness or violent behaviour.

Miss Paruntu posted on her Instagram that after her mother wrote to the Singapore Tourism Board and the Marriott customer service, the hotel, which is under Marriott International, apologised and refunded the $1,700 they had charged for the broken door.

TNP reached out to Miss Paruntu for comment yesterday but did not receive a response by press time.

Related Stories
15-year-old boy who sold 'Ice' to 14-year-old girl among 70 nabbed in CNB drug bust
Suspected drug trafficker, 47, had grandkids and child she was babysitting with her when arrested
Man who abandoned BMW after 2 accidents suffers fit during arrest, found with drugs
More About:
arrested
drugs
drug
hotel
birthday