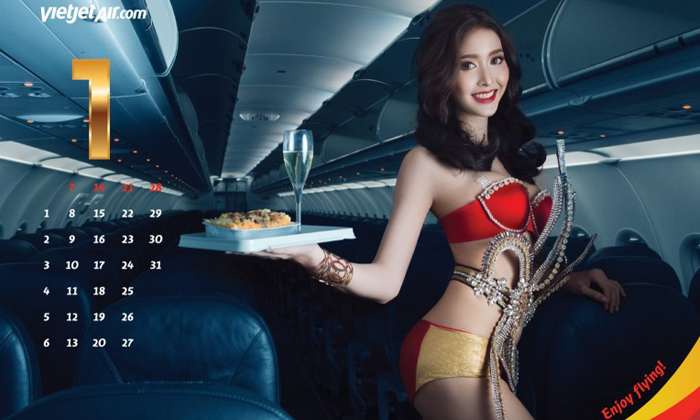 'When you think of VietJet Air, bikini-clad models and stewardesses come to mind.

This festive season, the airline has released, yet again, their 2018 calendar featuring models dressed in lingerie with the company colours - red and yellow.

Among them include Celine Franch, a 20-year-old American model who has over 950,000 followers on Instagram, and the Thai runner-up of Miss Tiffany's Universe 2017 Kwanlada Rungrojampa (Rock Kwanlada). Vietnamese runner-up of Asia’s Next Top Model 2017, Ming Tu Nguyen, was also involved in the photo shoot.

A VietJet Air spokesperson told Taiwan News that they worked hard to recruit top models from different countries for the photoshoot to help promote Vietnam as a tourism destination as well as to increase ticket sales for the airline.

VietJet Air is known for using scantily-clad girls in its promotional campaigns.

In 2014, the airlines was slammed for featuring bikini girls in its cabin in an apparent PR promotional stunt. Although cabin crew on VietJet Air are fully-clothed, the airline does occasionally offer special flights with the official bikini uniforms.

According to VietJet Air CEO Thi Phuong Thao, the calendars and bikini crew are "empowering images in Vietnam's conservative culture".

She told Bloomberg: “You have the right to wear anything you like, either the bikini or the traditional ao dai (traditional Vietnamese longtunic worn over loose pants). We don’t mind people associating the airline with the bikini image. If that makes people happy, then we are happy."

Browse all the images from the calendar in the gallery above.

Related Stories
Yum! Bikini-clad women serve food at Taipei hot-pot restaurant
Believe it or not, this is how China saleswomen promote gems, vacuum cleaners and even congee
Software publicity stunt? Bikini girls with barcodes walk around the streets of Beijing
More About:
model
beauty
airline