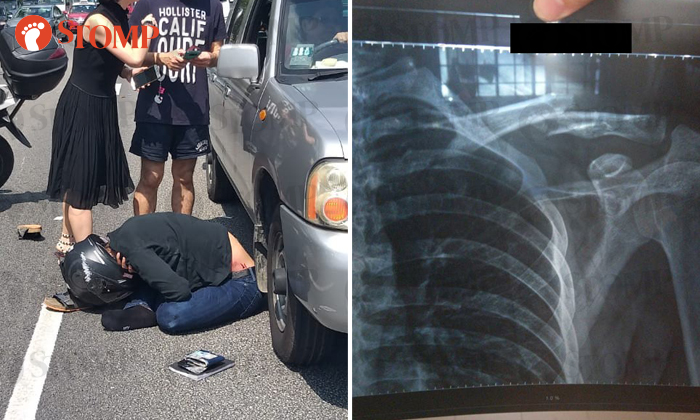 A motorcyclist who was hit by a car along the Pan-Island Expressway (PIE) on Christmas Eve (Dec 24) has reached out to Stomp with more details about what happened.

In an earlier report, Stomper Mira alerted Stomp to the accident that occurred towards Changi at around 11.25am.

The motorcyclist, whom Mira heard "screaming in pain", was seen wounded and subsequently taken to Tan Tock Seng Hospital.

On Friday (Dec 28), the injured motorcyclist contacted Stomp and recounted the incident.

The motorcyclist, who wished to remain anonymous, is also appealing for witnesses to come forward with video footage and more information.

"I was travelling on the second lane and the Mercedes-Benz A180 driver was on the first lane," said the motorcyclist, who had been on his way to Bugis to meet a friend prior to the accident.

"The driver wanted to come into the second lane due to a traffic jam or something, but side-swiped me.

"I fell from my bike and hit the ground. I felt a sudden 'drop' of my clavicle bone and screamed."

The 28-year-old told Stomp that he fractured his clavicle bone and underwent surgery two days ago (Dec 26).

"They inserted eight screws and one piece of steel plate in me," added the motorcyclist, who was hospitalised for four days and given another 45 days of hospitalisation leave. 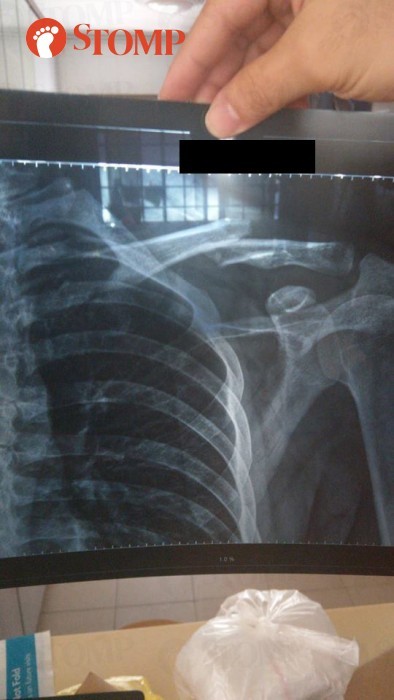 The motorcyclist also revealed: "I have spent $26,000 on my medical fees so far and will have permanent numbness on my chest."

According to him, the Mercedes driver and his female passenger had stopped after the accident and exited from their vehicle.

He shared: "The driver said that he did not have a car camera installed and therefore there is no video footage. But how is that possible?

"There was a Trans-Cab taxi and other vehicles behind, so I believe there will be footage, which I really need.

"I would like to use the power of Stomp to gather more information from Stompers and witnesses. I sincerely request for all your help to spread the news."

If you have any information or footage of the accident, kindly contact Stomp at stomp@stomp.com.sg or WhatsApp (+65) 9384 3761.